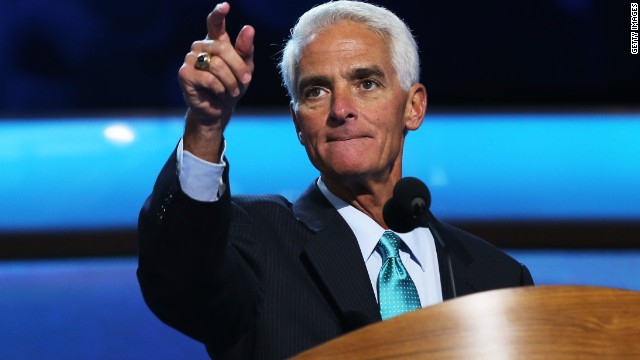 (CNN) - Former Florida Gov. Charlie Crist is looking to return to the state's highest office, according to documents filed Friday with the Florida Department of State.

Crist, who served as a Republican governor from 2007 to 2011, has an event scheduled for Monday in St. Petersburg for a "Major Announcement" where he is expected to formally declare his candidacy.

The twist? Crist's professed party in the campaign filing Friday is Democrat.

Crist famously separated from the Republican Party during his failed 2010 bid for the U.S. Senate.

At the time, he switched to Independent after he fell far behind in the race against a then little-known Marco Rubio, who went on to become the state's Republican Senator after a three-way race.

The reason for Crist's fall from the GOP was in part his 2009 embrace of President Barack Obama at an event pushing the federal stimulus.

Crist completed his transformation from red to blue when he changed his party affiliation to Democrat in 2012 after backing Obama for reelection and speaking at the Democratic National Convention that year.

"I didn't leave the Republican Party, the Republican Party left me," Crist said on CNN's "Piers Morgan Tonight" at the time, repeating a line he used at the Democratic convention. "Issue after issue they seem to get more strident and more difficult."

Polls have treated the political transition kindly, with potential voters in a March Quinnipiac University survey backing Crist 50% of the time to Republican Gov. Rick Scott's 34%.