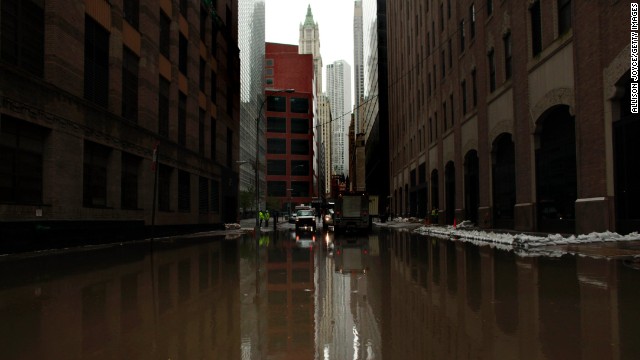 An executive order mandated steps to make it easier for communities "to strengthen their resilience to extreme weather and prepare for other impacts of climate change," according to a White House statement.

It also creates an interagency Council on Climate Preparedness and Resilience, charged with overseeing federal efforts at fighting climate change.

Made up of representatives from across the federal government, the council will work with a task force of state, local and tribal leadership also created by Obama's order.

The task force will advise the Obama administration on how the federal government "can respond to the needs of communities nationwide that are dealing with the impacts of climate change," according to the statement.

He also ordered land management policies that will protect natural resources and the development of data sets for Americans to better understand climate change.

The dual working groups have their work cut out for them as climate science clashes with political realities.

Congressional Republicans oppose virtually any effort to combat climate change, critical of federal regulations on emissions as burdensome on business. They are skeptical of the physical evidence on global warming, which an overwhelming majority of climate scientists support.

A recent survey released by the Pew Research Center showed that two-thirds of Americans, 67%, believe there to be solid evidence to support a warming Earth. Scientists say that scenario is causing increasingly violent storms and rising oceans.

While the overall percentage of Americans who accept climate change science has remained unchanged over the past few years, according to Pew, rifts within the Republican Party remain strong.

Only one in four (25%) tea party Republicans identified by Pew think there's solid evidence of global warming, compared to 61% of Republicans who do not identify with the tea party.