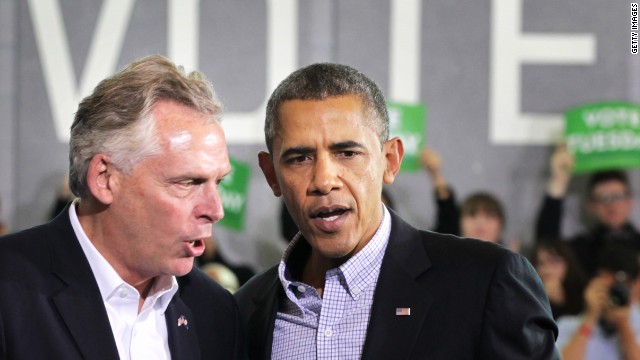 Arlington, Virginia (CNN) - President Barack Obama sidestepped talking about his signature achievement, health care reform, and instead focused on the politics of the government shutdown in a campaign rally to help Virginia Democrat Terry McAuliffe get over the finish line in Tuesday's governor's race.

McAuliffe, a best friend of the Clinton family, has been ahead of Republican Ken Cuccinelli, even if marginally, in every poll of the race taken since mid-July. A victory here Tuesday night could provide some cover to the Obama administration, which has been under fire for a month for the botched roll-out of the Affordable Care Act's sign-up website for the insurance exchange system October 1.

Cuccinelli, who is Virginia’s attorney general, has kept up a sustained attack on Obamacare for the past month, calling this election a referendum on the controversial law.

But a high-ranking national Democratic official told CNN that come Wednesday morning (should McAuliffe win, as they expect), the party will circulate videos of Cuccinelli saying repeatedly that if voters like Obamacare – unpopular though it may be – they should vote for McAuliffe.

And yet, even though the president avoided talking about the issue, he was plainly seeking to take advantage of a likely McAuliffe victory.

In his remarks Sunday at the Washington-Lee High School just across the Potomac in northern Virginia's Arlington, he noted that many high-profile figures have come out on the campaign trail for "the Macker," like Bill and Hillary Clinton, and even actress Kerry Washington.

"I was tired of having other people have all the fun," the president said. "I want to get in on the action."

Touting his own record, he mentioned that health care costs are "slowing." And blasting Republicans for what he called extremist views, he said, "You don't create jobs by trying to restrict the health care choices that women make."

The second comment is part of McAuliffe's strategy of targeting women voters by calling attention to Cuccinelli's efforts to restrict access to birth control, a position Democrats believe is fatal for Republicans in well-populated areas all over the country, like northern Virginia.

"It's very telling that Terry McAuliffe is spending the final days of the race campaigning with President Obama, just days after it was revealed that the President knowingly misled the American people when he said they could keep their preferred health plans," Richard T. Cullen, Cuccinelli's communications director said when asked about McAuliffe's strategy.

"McAuliffe has long been a staunch supporter of Obamacare and even supported the public option, which would have put us on a straight path to government-run health care."

While Republicans continue to hammer Democrats on Obamacare, the Democrats continue to return fire by blaming conservatives like Cuccinelli for the government shutdown.

Obama blamed the "extreme right of the Republican Party" for grinding progress to a halt in Washington.

"Here in Virginia, you saw the pain of the first government shutdown in 17 years," he said before criticizing Cuccinelli for saying Friday on Fox News that the shutdown is in the rearview mirror.

"It can't be in the rearview mirror if this is your operative theory of politics," Obama said. The president went on to say that being governor is a practical job, and they cannot afford to be ideologues.

And thanking the handful of former Republican officials who have thrown their support to McAuliffe, the president said: "They understand that the job of governor is not about tearing things down. It's about building folks up."

Obama ended his remarks by warning against complacency because McAuliffe has developed enough of a lead for long enough that Democratic officials now feel comfortable that they have basically put the race away. Having won the state in the last two presidential elections for the first time in decades, he warned that Virginia races are always close.

But the late push in the densely populated northern Virginia suburbs by high-profile Democrats like Obama and Vice President Joe Biden is about more than simply turning out the base for McAuliffe; Democrats are now pushing for a sweep of the state's three top offices. While they feel confident about winning the governor's and lieutenant governor's races, the attorney general's race between Democrat Mark Herring and Republican Mark Obenshain is closer. If the Democrats can pull off all three, it gives the president a critical talking point and the state's Democratic Party an edge headed into next year's midterm elections.