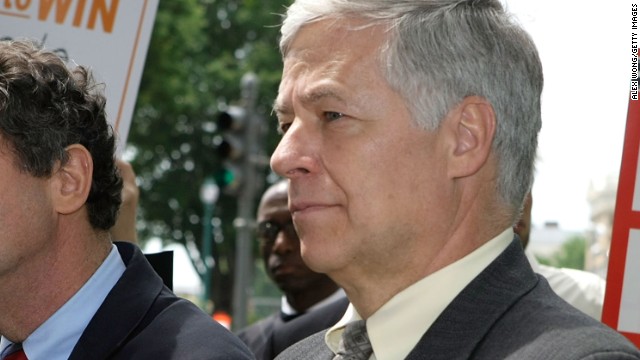 (CNN) – Democratic gubernatorial hopeful and U.S. Representative Mike Michaud of Maine announced Monday he's gay, writing about his personal life in an opinion piece for newspapers in his state.

If Michaud wins in 2014 and unseats Republican incumbent Gov. Paul LePage, he would become the first openly gay candidate to be elected governor.

The six-term U.S. Congressman's announcement makes him the 8th openly gay member of Congress, with seven in the House and one in the Senate.

Michaud, who announced he was running for governor in August, says he made his decision to come out in response to "whisper campaigns, insinuations and push-polls" from his political opponents.

"Allow me to save them the trouble with a simple, honest answer: 'Yes I am. But why should it matter?'" he writes.

He's not the only "out" candidate running for governor next year. Others include Democratic state Rep. Heather Mizeur in Maryland and independent Todd Giroux in Rhode Island. Both states allow same-sex marriage.

While Michaud says his opinion piece may "seem like a big announcement to some people," he adds "it's just a part of who I am, as much as being a third-generation mill worker or a lifelong Mainer."

"One thing I do know is that it has nothing to do with my ability to lead the state of Maine," he writes.

Michaud first served in the Maine state legislature, before being elected to the U.S. House in 2002.

"I write this now merely to let my opponents and the outside interests who fund them know that I am not ashamed of who I am," he says in the opinion piece. "And if seeing someone from my background, in my position openly acknowledge the fact that he's gay makes it a little bit easier for future generations to live their lives openly and without fear, all the better."

Some of Michaud's fellow members of Congress welcomed the news on Monday.

"My #gaydar missed it, but happy to welcome @RepMikeMichaud to team," Rep. Jarid Polis, D-Colorado, wrote on Twitter.

My #gaydar missed it, but happy to welcome @RepMikeMichaud to team #lgbt!

Rep. Chellie Pingree, D-Maine, wrote on Twitter that she was "so proud to serve with" Michaud and linked to his opinion piece.

Same-sex marriage became legal in Maine in December, and the state voted for President Barack Obama over Republican nominee Mitt Romney by a wide margin in November, 56%-41%.

In additional to Michaud, two other Democrats have announced their candidacy, while three independents have pledged to run.

LePage, who's become known for his outspoken, sometimes off-color comments, won his election bid in 2010 with 38% of the vote in a crowded gubernatorial race.