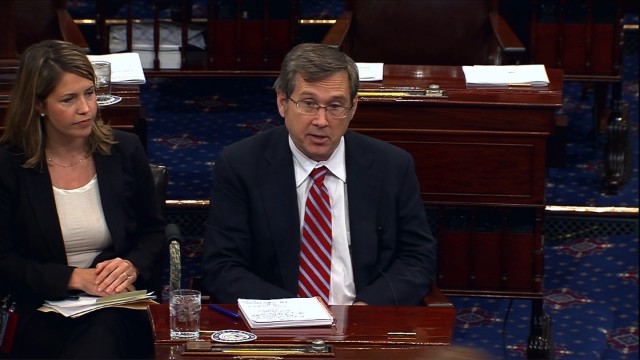 Washington (CNN) - A Republican senator who suffered a debilitating stroke nearly two years ago spoke Monday on the Senate floor for the time since returning to the chamber.

In halting but clear speech, Sen. Mark Kirk of Illinois spoke briefly in favor of a bill that would ban workplace discrimination based on sexual or gender identity. The Senate is debating and voting on the bill, which is known as the Employment Non-Discrimination Act, this week.

"I would say that I have been silent for the last two years due to a stroke a little under two years ago," Kirk said. "I have risen to speak because I believe so passionately in enacting the ENDA statute which is, you know, this is not a major change to law. I would say it is already the law in 21 states."

Kirk, who is a co-sponsor of the bill, is one of only five Republican senators to express support for new protections.

"I think it's particularly appropriate for an Illinois Republican to speak on behalf of this measure," he said. "In the true tradition of Everett McKinley Dirksen and Abraham Lincoln, men who gave us the 1964 Civil Rights Act and the 13th Amendment to the Constitution."

Kirk's remarks lasted just under one minute. He delivered them seated after seeking special permission from the presiding officer to do so.