(CNN) – In Alabama, the establishment won.

5 things you should know about New York's new mayor

Known for its liberal politics, New York City has not elected a Democrat in the last five mayoral elections, with Bloomberg serving three terms and Rudolph Giuliani before him serving two.
END_OF_DOCUMENT_TOKEN_TO_BE_REPLACED

In his victory speech, McAuliffe painted his win as a point for bipartisanship.

"This election was never a choice between Democrats and Republicans, it was a choice about whether Virginia would continue the mainstream, bipartisan tradition that has served us so well over the last decade," he said, offering praise to both the incumbent Republican governor and his Republican rival.
END_OF_DOCUMENT_TOKEN_TO_BE_REPLACED

"Make no mistake: The people of this city have chosen a progressive path, and tonight we set forth on it, together, as one city," de Blasio said in his victory speech.
END_OF_DOCUMENT_TOKEN_TO_BE_REPLACED

What Christie's victory means for the next presidential race

(CNN) - Chris Christie's re-election speech Tuesday night sounded like something more, as the Republican governor of New Jersey with national aspirations touted his bipartisan successes and railed at the partisan gridlock in the nation's capital.

"It wasn't an acceptance speech, that was an announcement speech," said CNN contributor Alex Castellanos, a Republican strategist and veteran of numerous GOP campaigns.

END_OF_DOCUMENT_TOKEN_TO_BE_REPLACED

(CNN) - Sen. Rand Paul labeled New Jersey Gov. Chris Christie a "moderate" on Tuesday, hours after the governor described himself as a "conservative."

"I think the Republican Party is a big party, and we need moderates like Chris Christie who can win in New Jersey," Paul said on CNN's The Situation Room with Wolf Blitzer.
END_OF_DOCUMENT_TOKEN_TO_BE_REPLACED

Christie wins in New Jersey, CNN predicts; it's too early to call in Virginia

Christie's victory became a forgone conclusion long before polls closed in New Jersey, as public opinion polls for months have indicated the tough-talking Republican headliner was far ahead of his Democratic challenger. 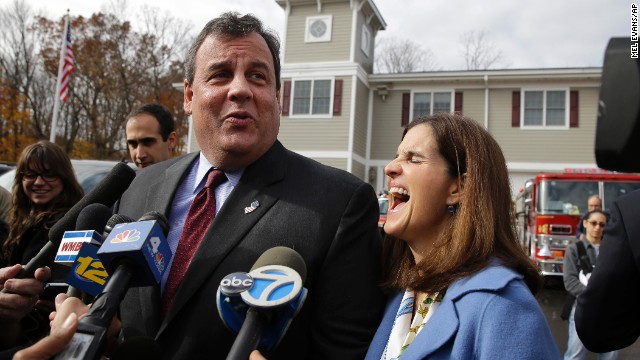 But the big questions heading into Tuesday's gubernatorial election were how large a victory the high-profile Republican with national aspirations would capture against state Sen. Barbara Buono, his little-known Democratic challenger, and how Christie would perform with voters who tend to cast ballots for Democrats.

END_OF_DOCUMENT_TOKEN_TO_BE_REPLACED

(CNN) - Polls have closed in Virginia but the race for governor there between Democrat Terry McAuliffe and Ken Cuccinelli is too close to call. Here are results of CNN's early exit polls conducted on Tuesday in Virginia:

McAuliffe capturing moderates, women
McAuliffe is doing well with key voting blocs in Virginia. Among the 44% of voters who call themselves moderate, McAuliffe leads Cuccinelli by 28 points (58%-30%). McAuliffe is also benefitting from the gender gap. While men split virtually evenly between the two major party candidates, women back McAuliffe by 16 points (54%-38%). But Cuccinelli is winning among self-described independents by 11 points (47%-36%).
END_OF_DOCUMENT_TOKEN_TO_BE_REPLACED