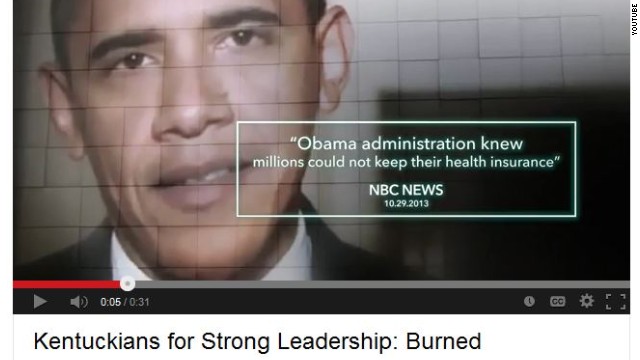 Washington (CNN) - The controversy over President Barack Obama's dialing back of his famous healthcare pledge is playing out immediately in real time on the campaign trail.

American Crossroads, a leading pro-GOP super PAC that was co-founded and is steered by Karl Rove, announced Tuesday that it's going up with paid web ads that target three Democratic Senators who face tough re-election bids next year. The spots tie the lawmakers to the President's claim that Americans could keep current health insurance under the Affordable Care Act if they preferred it.

The minute-plus Crossroads videos highlight numerous old clips of the President pledging that Americans can keep their health care plan if they like it, along with new news reports declaring that the claim is incorrect and suggesting that the White House knew that insurance companies could cancel some plans.

The internet ads are targeting Democratic Sens. Mark Begich of Alaska, Kay Hagan of North Carolina, and Mary Landrieu of Louisiana. The videos include clips of those Senators repeating the President's claim that Americans can keep their insurance plans under Obamacare. The spots end with the tagline: "Obama lied, Begich (or Hagan or Landrieu) lied, your healthcare died."

Meanwhile, Kentuckians for Strong Leadership, a super PAC backing McConnell as the top Senate Republican runs for a sixth term in office, announced that they're spending $340,000 to run an ad statewide that links Kentucky Secretary of State Alison Lundergan Grimes with the President and his health care claim.

"Grimes and Obama. When liberals don't tell the truth, Kentucky gets burned," says the announcer in the TV commercial.

"Mitch McConnell is a walking, talking caricature of everything that is wrong with Washington. This incredibly weak ad will do nothing to dissuade Kentuckians that after 28 years it is time for a change," Democratic Senatorial Campaign Committee Deputy Executive Director Matt Canter told CNN, in response to the ad.