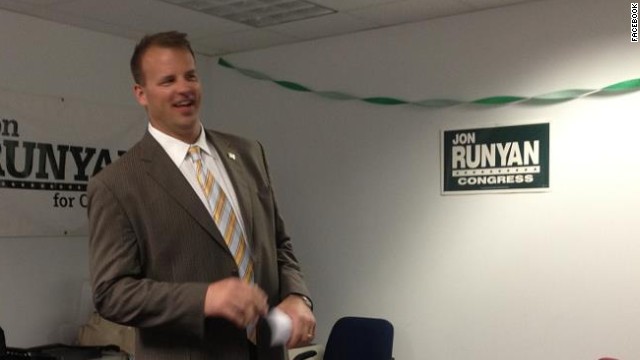 House Republican not running for re-election

In a statement released Wednesday morning Runyan said "politics shouldn't be a career and I never intended to make it one. While it has truly been an honor to serve the people of New Jersey's 3rd Congressional District, at this stage in my life, and more importantly, the lives of my three children, spending time with them is my top priority. As I serve out the rest of my term, I will continue to work hard on behalf of the people of South Jersey."

New Jersey-3, which stretches from the Delaware River to the Jersey shore, is considered a swing district. Runyan narrowly won election in 2010, and grabbed 54% of the vote in his re-election last year. While George W. Bush narrowly won the district in his 2004 presidential re-election, Barack Obama carried it in 2008 and 2012, winning 52% and 54% of the vote.

Runyan is considered a more moderate Republican, breaking with many House conservatives in voting earlier this year for Superstorm Sandy aid and for extending the Violence Against Women Act. He has been constantly targeted by the Democratic Congressional Campaign Committee.

"Congressman Runyan is the 14th House Republican to bail from Speaker Boehner's sinking ship, and his retirement makes this swing district even more competitive. The voters of New Jersey's 3rd Congressional District will have a chance in 2014 to elect a problem-solving Democrat in this toss-up district that President Obama won twice and that sent Democrats to represent them in the U.S. Senate," said Rep. Steve Israel of New York, DCCC chairman.

"Jon came to Congress to help get our country back on track, and since day one, he has been an important part of our efforts to reform the federal government and get reckless spending under control," said Rep. Greg Walden of Oregon, the chairman of the National Republican Congressional Committee, in a statement.

The NRCC statement made no mention of keeping the district in party hands, but a GOP source says the party's committed to keeping the seat in Republican hands.

"While this has always been a competitive district, both Jon Runyan and Chris Christie have proven that Republicans win here. While we will not take this seat for granted, we will keep this seat in the Republican column," said the official, who asked to remain anonymous to speak more freely.

Runyan was a top offensive lineman with the Philadelphia Eagles. He ended his NFL career with the San Diego Chargers.