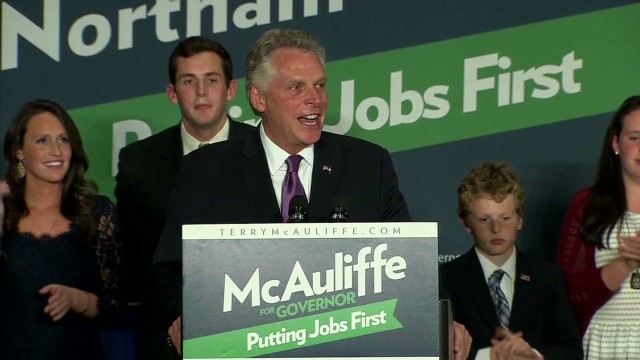 The Main Story Lines: Christie wins big in New Jersey; McAuliffe squeezes out a victory in Virginia; de Blasio’s crushing victory means a Democrat will lead the Big Apple for the first time in more than 20 years; and the GOP establishment scores a win over the tea party in Alabama.

The 2013 election is so yesterday as we look forward to the 2014 midterms and the wide open presidential race in 2016. But before we do …

LET’s BREAK DOWN THE RESULTS …

Exit polls: Christie and McAuliffe took different paths to victory
The fact that Chris Christie rolled to a second term in New Jersey and Terry McAuliffe won in Virginia wasn't a surprise. Public opinion polls have consistently shown both men in the lead. – Alan Silverleib

Election Night 2013: Christie wins big, Virginia provides drama
Going into Election Day 2013, there was little doubt that Chris Christie was going to win his run for re-election. The only unknown was what he would say in his victory speech.

NYC: 5 things you should know about New York's new mayor
Bill de Blasio will be the first Democratic mayor in New York City in two decades, easily defeating Republican Joe Lhota by running a campaign that rejected the politics of his predecessor, Michael Bloomberg. -Julian Cummings

maggie haberman ‏(@maggiepolitico)
How they love @jaketapper in this convention hall

Top 10 things you never knew about the House of Representatives:

A few of our favorites:

9. “Members may vote yea, nay or whatever.”
2.”We have the power to impeach talk show hosts.”
1.”The tea party isn’t nearly as much fun as it sounds.”

CNN Money (@CNNMoney)
It looks like U.S. stock markets will open with a pop this morning. http://cnnmon.ie/1gqPJ9S via @CNNMoneyInvest

Jessica Taylor @JessicaTaylor
What a lot of GOPers are thinking today #VAGov RT @mattklewis: My latest: Ken Cuccinelli - What might have been http://bit.ly/1a6yPZc

John Avlon @JohnAvlon
Revenge of the RINOs – a look at Chris Christie's margin of victory across demographic divides http://thebea.st/HyVJ1H via @thedailybeast

stuart stevens (‏@stuartpstevens)
For everyone pursuing narrative that Republicans are tearing themselves apart, might want to listen to Barbara Buono attacking her Party.
–
David Leonhardt‏ (@DLeonhardt)
@stuartpstevens Good point. Main difference seems to be fact that right has much more power over Rs than left has over Ds.
–
stuart stevens‏ (@stuartpstevens)
@DLeonhardt Longer discussion but pretty sure Hillary '08 supporters thought left had too much power. Quinn supporters in NYC as well.

Eric Weisbrod‏ (@EricWeisbrod)
Boston’s on a winning streak: A world series and now a NYC mayor who favors the Red Sox.

Peter Hamby‏ (@PeterHambyCNN)
worth nothing: RGA went off TV in Virginia several weeks ago + RNC committed far less than in 2009 race, when they spent $9 mil.

Lizzie O'Leary (@lizzieohreally)
Does Virginia have a Lincoln bedroom?

Ben Pershing‏ (@benpershing)
Cuccinelli: "This race came down to the wire because of Obamacare." #vagov

The White House released a statement late Tuesday evening saying that Obama had placed calls to a handful of successful Democratic candidates …
“This evening, the President telephoned Virginia Governor-elect Terry McAuliffe, New York Mayor-elect Bill De Blasio and Boston Mayor-elect Martin Walsh. He congratulated each of them on their election victories and vowed to work with them in the months ahead to expand economic opportunity for middle class families in their communities.”

Joe Biden also made a congratulatory call to Iowa …
http://t.co/DAWNh5hcmT