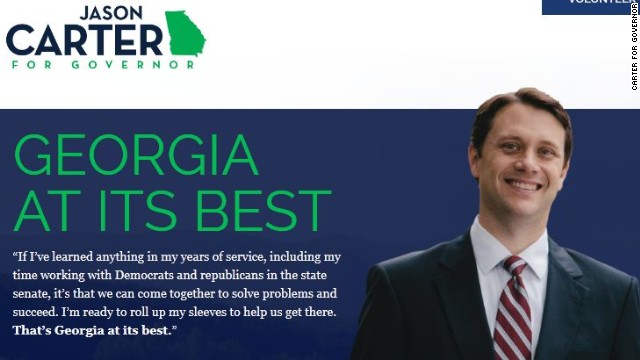 (CNN) - The grandson of former President Jimmy Carter is hoping to follow in his famous grandfather's footsteps, as he launches a bid for Georgia governor.

Democratic state Senator Jason Carter is expected to formally announce his candidacy Thursday morning at an event in Atlanta, but he's already quoted on his campaign website as saying "I am running for Governor because I believe in Georgia at its best."

"In my years in the State Senate, I have fought to grow the middle class and help small businesses; to support public schools and make higher education affordable; and to reform our ethics laws," adds Carter.

"That is what I will continue to do as your Governor."

Carter is expected to become the Democratic frontrunner in the bid to unseat first-term Republican Gov. Nathan Deal, who's already facing two GOP challengers. While Republicans have dominated statewide elections in Georgia over the past decade, Democrats are confident that the state's changing demographics will make them more competitive.

One of Deal's GOP challengers seemed painfully aware of that changing dynamic in a statement released Thursday.

"The Democrats are coming out of the woodwork because they know the vulnerability of our current governor," David Pennington, mayor of Dalton, Georgia, said in the statement.

"If we want to keep Georgia a red state, we cannot have a candidate at the top of the Republican ticket tarnished by ethical problems and who has a poor economic record, highlighted by our state remaining at the top of the unemployment rankings."

Carter was first elected to the Georgia state Senate in 2010. Now, he's looking at taking the next step, as his famous grandfather did.

Jimmy Carter won a seat in the state Senate in 1962 before winning election as Georgia governor in 1970. Carter, of course, went on to win the White House in 1976, defeating incumbent GOP President Gerald Ford.

Carter is not the only famous Democratic name seeking high office in Georgia in 2014. Michelle Nunn is pursuing the same U.S. Senate seat her famous father, Sam Nunn, held for 24 years.

A lawyer by day, Carter first announced his candidacy in an exclusive interview with the Atlanta Journal-Constitution.