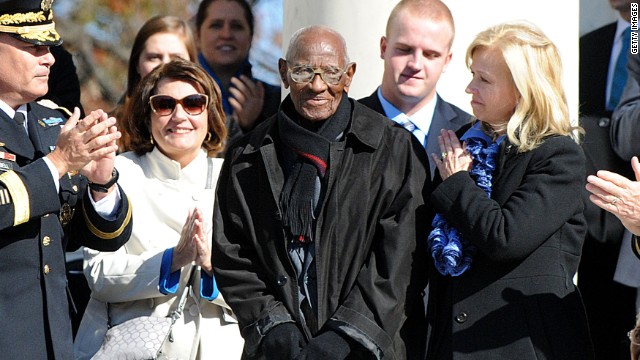 DEVELOPING: 10,000 FEARED DEAD, LITTLE RELIEF FOR TYPHOON SURVIVORS
Troops and aid organizations battled blocked roads and devastating damage Monday to deliver help to stranded Filipinos struggling to survive the powerful storm's aftermath, even as another tropical system moved in to deliver more unwanted rain. …"There are too many people dead," said Richard Gordon, chairman of the Philippine Red Cross. "We have bodies in the water, bodies on the bridges, bodies on the side of the road." – Paula Hancocks, Ivan Watson and Jethro Mullen

THE NUMBER OF THE DAY: 11
Veterans Day is celebrated each year on the 11th hour of the 11th day of the 11th month of the year to honor the time in which the armistice ending World War I was officially signed. Congress declared "Armistice Day," a national holiday in 1938 to commemorate the end of World War I and to honor military veterans.

THE BUZZ: A white candidate wins a surprising seat on the Houston Community College board to a 24-year incumbent by leading voters to believe that he was black? According to local affiliate KHOU, businessman Dave Wilson implied in emails and mailers that he was black by showing pictures of black faces that he lifted off the Internet, and captioning them, "Please vote for our friend and neighbor Dave Wilson." KHOU also reported that Wilson wrote on flyers that he was endorsed by Ron Wilson. Although underneath the statement in fine print Wilson wrote on flyers, “Ron Wilson and Dave Wilson are cousins,” voters may have still easily confused the endorsement for a different Ron Wilson, a Wilson who is a former black Texas state representative.

In an interview with CNN, Wilson denied allegations over race.

MARKET WATCH: Dow manages to end at a record high in an otherwise quiet day of trading. S&P inches just shy of a record.

TRAIL TRIVIA
(Answer below)
What was written on former Senate Majority Leader Robert Dole’s forehead after he had been nearly killed in battle during WWII?

Leading CNNPolitics.com: Difference of 17 votes in VA AG race: recount appears likely
The race for Virginia Attorney General appears headed for a recount, with 17 votes separating the candidates a week after Election Day out of more than 2.2 million ballots cast. – Bryan Koenig and Dan Merica

Leading Drudge: STOCKS RISE 108% SINCE PRESIDENT
Even with the flawed roll out of health-care reform and uproar over spying, Barack Obama is enjoying one of the best stock markets for a re-elected president. Signs are building that it might not last. – Whitney Kisling

Leading Politico: Inside a green billionaire's Virginia crusade
Tom Steyer is Virginia’s $8 million man. The California billionaire spent nearly that much from his personal fortune to make an example of Republican Ken Cuccinelli for his arch-conservative views on the environment. The sum is more than three times the investment that’s been previously reported, and it nearly matched what the Republican Governors Association, the largest GOP outside spender, put into the Virginia governor’s race. It is more money, on a per-vote basis, than the famously prolific conservative donors Sheldon and Miriam Adelson spent in the 2012 presidential election. – Alexander Burns and Andrew Restuccia

Leading The New York Times: For 2014, G.O.P.’s Challenges Stem From Within
In the battle over the Republican Party’s ideological future, a number of races could alter the party’s complexion in the House — and Washington’s ability to govern.- Jonathan Weisman

- McCain won’t run for president in 2016, blames the people -
SEN. JOHN MCCAIN IN AN INTERVIEW WITH THE ARIZONA REPUBLIC: “Particularly since the shutdown, I’ve had a spate of e-mails and letters and phone calls saying, ‘Run for president again,’ … As you know, I’m seriously thinking about running for re-election to the Senate. But I think, in the words of the late Morris K. Udall, as far as my presidential ambitions are concerned, ‘The people have spoken — the bastards.’ ”

- Obama honors oldest living WW II veteran –
PRESIDENT BARACK OBAMA SPEAKING ABOUT RICHARD OVERTON JOINED TODAY AT ARLINGTON NATIONAL CEMETERY: “Richard still lives in the house that he built all those years ago. He rakes his own lawn. And every Sunday he hops in his 1971 Ford truck and drives one of the nice ladies in his neighborhood to church. This is the life of one American veteran, living proud and strong in the land he helped keep free ... Richard Overton, this American veteran, is 107 years old. And we are honored that he’s here with us today.”

Jake Tapper‏ (@jaketapper)
Interviewing @SarahPalinUSA tomorrow about her new Christmas book + more. What would you ask her? Use #PalinQs

Emmarie Huetteman (@ehuetteman)
Founder of Chick-fil-A is stepping down, leaving son who made comments about gay marriage in charge: bit.ly/1bkOlym

CNNMoney.com (@CNNMoney)
Neither rain nor snow nor gloom of night - and now, nor Sunday - will stop the #PostalService, at least for Amazon. cnnmon.ie/1btFqw4

The letter “M” was written on Robert Dole’s forehead after he had been severely injured in combat during World War II.

During combat in southern Italy, Dole was hit by a German machine gun, leaving him severely injured and paralyzed in his right arm. To ease his pain, his fellow comrades gave him a large dose of morphine. They used Dole’s own blood to mark an “M” on his forehead, signaling to other soldiers that he had already been injected with a large dose of powerful painkiller, and thus not to give him another dose that would likely kill him.

When asked what he would tell young veterans suffering with wartime injuries to help them get through the pain, Dole told CNN’s Candy Crowley on Sunday, “I think we just have to tell them we are obligated to be sure they get everything they need during their lifetime. I mean they almost gave their life for their country and I believe this is one area where the American people would be almost unanimous if it called for a tax increase or whatever to take care of the veterans.”