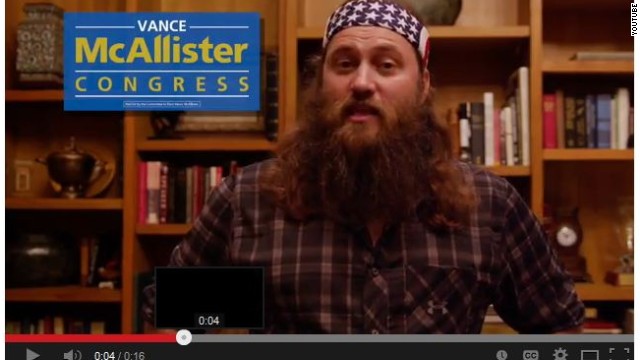 (CNN) - After briefly flirting with running for the seat himself, “Duck Dynasty” star Willie Robertson is calling on Louisiana voters to support a fellow Republican for the state’s 5th Congressional District.

“Hey this is Willie Robertson reminding you to get out Saturday, November 16 and vote for my good buddy, Vance McAllister,” Robertson said in a YouTube video posted Wednesday.

“Let’s send somebody from the fifth district who speaks for us to help turn Washington around.”

Robertson is the thickly bearded head of the Duck Commander family-owned duck call business featured in the hit reality show.

In August, CNN's John Berman reported that some in the GOP were calling on Robertson to run for the seat himself.

Instead, Robertson chose to hit the campaign trail for McAllister, a businessman and Republican who came close enough in the district’s October 19 primary to go to a runoff scheduled for Saturday with state Sen. Neil Riser, also a Republican.

Robertson did not run in the October primary that included more than a dozen candidates.

According to the Louisiana Secretary of State’s office, McAllister earned just shy of 18% of the vote in the primary compared to the nearly 32% who voted for Riser. Both men are running on strong anti-liberal, anti-Washington platforms.

Riser in turn argues on his campaign website that “the liberals who run the federal government are bullies,” and vows to fight them.

–CNN’s Bryan Koenig and Dan Merica contributed to this report.