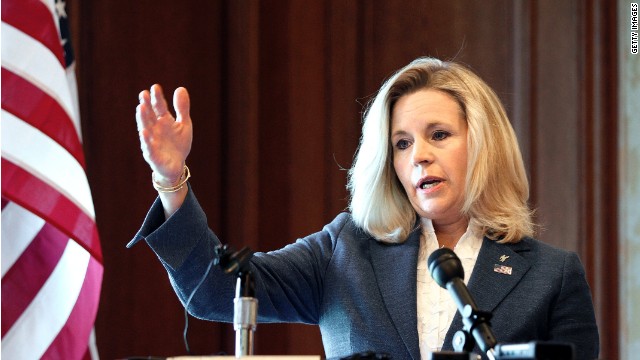 (CNN) - A fifth-generation Wyomingite, a family woman of conservative principles, and a member of a new generation of leaders.

That's the picture Liz Cheney's campaign paints in its first television ad, which will debut across the Cowboy State on Thursday.

[twitter-follow screen_name='politicalticker']
"I'll fight hard, I'll fight smart, and I'll get the job done," says Cheney, the eldest daughter of former vice president Dick Cheney, who served for a decade as a congressman from Wyoming.

The former State Department official and Fox News contributor announced her candidacy in mid-July, challenging incumbent Republican Sen. Mike Enzi. A three-term senator, Enzi was caught off guard by Cheney's announcement, telling reporters at the time that she had previously promised not to not enter the Republican primary if he sought re-election.

Since then, Cheney's campaign has torn into the 69-year old senior senator, calling his age into question.

"I'm running for the United States Senate because it's time for a new generation of leaders to step up to the plate," she says in the new ad.

For its part, the Enzi campaign and its affiliates have questioned Cheney's Wyoming roots.

Some have accused the Wisconsin-born, Virginia-raised lawyer of being a carpetbagger, and the social-conservative PAC American Principles Fund called her "wrong for Wyoming" in television ads this fall.

That charge is one Cheney is actively combating. The new ad features childhood photos from her time in Wyoming, a family tree of famous Wyomingites dating back to 1852, and lots of air time for her husband and five children, with whom she moved to Jackson Hole last year.

The primary will take place next February, and the general election, next November.