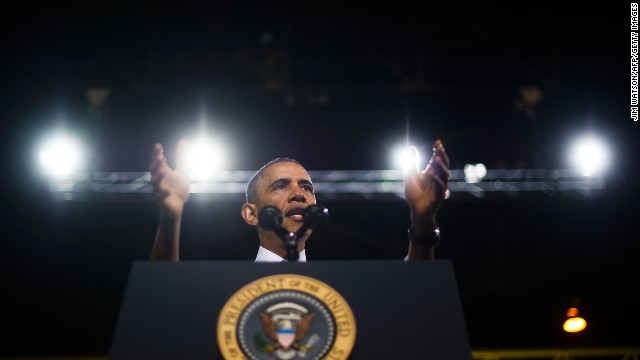 After fix, Obama vows not to 'gut' health care reform

"We're not going to gut the law. We're going to fix what needs to be fixed," Obama said, blaming an "entrenched" attitude and a botched rollout for distracting from the measure's reforms.

"We always knew this was going to be hard," Obama said. "There's a reason folks have tried to do it for 100 years and haven't done it."

Speaking at the ArcelorMittal steel plant in Cleveland, Obama said he wasn't going to revert to a "broken system" of care that allowed insurance companies to deny coverage based on preexisting conditions.

"I'm going to see this through," the president vowed.

His remarks in Ohio came on the same day that Obama revealed a new administration effort to allow Americans who have lost their individual health insurance plans to keep them for another year, a major shift in policy that came in the wake of accusations he made misleading statements when selling the law in 2009 and 2010.

Speaking at the White House, Obama said he would work tirelessly to win back support from Americans who may have lost faith in his administration after the flawed Obamacare rollout.

His remarks in Ohio sought to underscore what the White House says is a bright spot of his record: economic gains and a boost in manufacturing thanks to a revitalized auto industry.

Obama said his team had bet on "American ingenuity," and pointed to the steel plant's success as an example of American resilience.

ArcelorMittal - a Luxembourg-based steel giant whose Cleveland facility is located within a sprawling complex of plants situated on the Cayahoga River - is the largest supplier of steel to U.S. auto manufacturers, which have rebounded after a federal government bailout in 2008 and 2009.

A resurgent auto industry has helped bolster manufacturing gains in the United States, though the added jobs haven't erased the massive losses the sector withstood over the past decade. During his re-election bid, the president set a goal of one million new manufacturing jobs over the course of his second term. The sector's current pace of job creation isn't enough for that goal to be met in the next three years.

"It's not just how much you get in your paycheck. It's the sense of, 'I'm making something and helping to build this economy," Obama said Thursday.

"It tells us what we're worth as a community," he added.