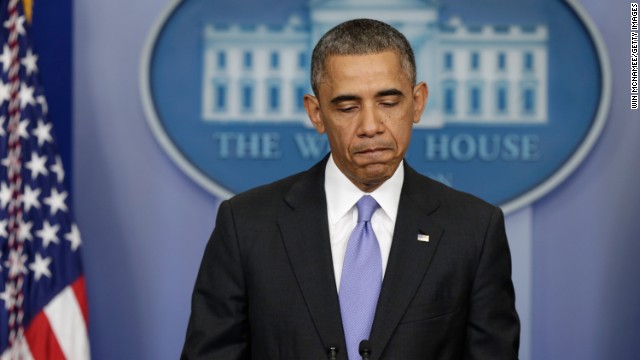 OBAMA: “WE FUMBLED”
In a long, riveting press conference, President Barack Obama apologized for the “rough” roll out of Obamacare and offered a fix for many Americans to keep their individual insurance plans for one more year.

- Obama to Democrats: ‘I’m sorry’ -
PRESIDENT OBAMA AT A WHITE HOUSE PRESS BRIEFING: "There is no doubt that our failure to roll out the ACA smoothly has put a burden on Democrats whether they are running or not because they stood up and supported this effort through thick and thin. And you know I feel deeply responsible for making it harder for them rather than easier for them to continue to promote the core values that I think led them to support this thing in the first place which is in this country, as wealthy as we are, everybody should be able to have the security of affordable health care."

- A few hours later, making the sell to America -
PRESIDENT OBAMA, IN CLEVELAND, OHIO, AT A STEEL COMPANY:
“You know, you may have read we had some problems last month with websites. I am not happy about that. I had a press conference today and I said we fumbled the ball in terms of rollout. But we always knew this was going to be hard. There is a reason folks that tried to do it for 100 years and hadn’t done it. It is complicated. There are a lot of players involved. The status quo is entrenched. So, yes, there is no question the rollout on the affordable car act was much tougher than we expected I want everybody here to understand I am going to see this through.”

SOME (2014) DEMOCRATS STILL PUSHING THEIR OWN FIX
SEN. MARY LANDRIEU, D-LOUISIANA, IN AN INTERVIEW WITH DANA BASH: “The president's guidance was welcomed and well received. We still may have to fashion some legislation and we are going to continue to work in that regard … I have a bill. There are other bills that have been filed. We are going to be working across the aisle not to repeal the ACA, not to defund the ACA, not to undermine the ACA, not to gut the ACA, but to fix it."

- Business: Obama’s fix may destabilize the market -
KAREN IGNAGNI OF AMERICA’S HEALTH INSURANCE PLANS, IN A STATEMENT RESPONDING TO OBAMA'S ONE YEAR DELAY: “Changing the rules after health plans have already met the requirements of the law could destabilize the market and result in higher premiums for consumers. Premiums have already been set for next year based on an assumption of when consumers will be transitioning to the new marketplace. If now fewer younger and healthier people choose to purchase coverage in the exchange, premiums will increase and there will be fewer choices for consumers. Additional steps must be taken to stabilize the marketplace and mitigate the adverse impact on consumers.”

- Cruz: ‘There was vindication’ ––
SEN. TED CRUZ, R-TEXAS, AT THE WASHINGTON IDEAS FORUM: "A few weeks ago there were lots of people, particularly in Washington that were saying, ‘Why are you guys fighting so hard no this?’ And with just the passage of a few weeks, people aren’t asking that anymore. I don’t get that question anymore. People all over are saying, ‘OK. Now I understand why all of you were fighting.’ And what I do think? There was vindication for the millions of Americans all across this country, who back in September, back in October, were standing up saying, ‘Obamacare isn’t working. It’s killing our jobs and it’s going to take away our healthcare.’ Now we’ve seen that those millions of Americans were right and I wish that Congress had listened to them before over 5 million people had lost their healthcare.”

TRAIL TRIVIA
(Answer below)
Where was President Kennedy headed when he drove through Dealey Plaza the day of his assassination?

Gloria Borger for CNN.com/Opinion: OBAMA IS 'MAD, FRUSTRATED AND ANGRY'
“Mad that his signature legislative achievement is stuck at the gate, frustrated that he's running out of time to fix it and angry that he's got a second-term agenda now going nowhere. He's so furious, in fact, that he stepped out of character to vent to an assembled group of top aides. ‘If I had known (about the website problems),’ the steaming President said, according to The New York Times, ‘we could have delayed the website.’" – Gloria Borger

Leading Drudge: FAIRY TALE
Earlier this week, former President Bill Clinton advised President Obama to "honor the commitment" he made and to allow Americans to keep their health care plans, if they like them. That was a central promise Obama made when he sold Obamacare, but one that turned out not to be true when Obamacare began to be implemented last month. – Daniel Halper

Leading Politico: 10 ways President Obama said he’s sorry
President Barack Obama on Thursday announced the White House would pursue an administrative solution to the millions of health insurance cancellations associated with the Affordable Care Act, striking a deeply apologetic tone for the disruption caused by the law and HealthCare.gov’s failure. Here are the 10 best lines from the news conference: – Jose Delreal

–McCain: 'a long way’ from repeal -
SEN. JOHN MCCAIN R-ARIZONA AT THE WASHINGTON IDEAS FORUM RE: THE GOVERNMENT SHUTDOWN: "This government shutdown was very harmful to my state and my citizens. It was an outrageous, stupid, pointless fight that we could not win. I’ve been in a lot of fights in my life and I know when I can win and I know when I can’t. It would take 67 votes in the United States Senate to repeal Obamacare. We’re a long way from there."

- McCain: ‘Disappointed’ in Kerry, calls friend a ‘wrecking ball’ -
SEN. JOHN MCCAIN R-ARIZONA AT THE WASHINGTON IDEAS FORUM RE: IRAN SANCTIONS: “Frankly I have never been more worried about the parameters of this deal. I am told yesterday that Secretary Kerry refused to give any details of the negotiations, position of the United States in these negotiations, and yet at the same time wants to rely on our good will. Look, this guy has been a human wrecking ball … Secretary Kerry, a good friend of mine. He is, but I am very disappointed. I’m very disappointed.”
http://politicalticker.blogs.cnn.com/2013/11/14/mccain-calls-kerry-a-human-wrecking-ball-on-iran-negotiations/comment-page-1/

Karen Tumulty ‏(@ktumulty)
Suggested fix for policy cancellation problem: Build a time machine. Go back to 2008. Don't promise that if people like what they have....

Ashley Killough‏ (@KilloughCNN)
Obama: "When I do some Mon. morning quarterbacking on myself...we might have done more to make sure we were breaking the mold" with website

Patrick Millsaps‏ (@PatrickMillsaps)
ONLY IN AMERICA: So far this week, "incorrect promise" was invented & we learned that a committee "votes" to determine building heights.

Peter Sagal (‏@petersagal)
It's telling that Michelle isn't standing by her man at this press conference.

Aaron Blake ‏(@AaronBlakeWP)
Pelosi on Boehner saying he won't go to conference on immigration: "I don't even accept that as a serious statement."

Roger Simon ‏(@politicoroger)
As somebody said, if Sarah Palin thinks the Pope is a liberal, wait until she meets Jesus.

Sarah Palin‏ (@SarahPalinUSA)
Just to clarify my comment to Jake Tapper about Pope Francis, it was not my intention to be critical of Pope... http://fb.me/UgbKkcyq

Nearly 50 years ago, President John F. Kennedy was assassinated on his way to a luncheon at the Dallas Trade Mart. Shots were fired while the president and his wife were riding in a motorcade from the Dallas Airport through the suburbs of Dallas, waving to people crowded in the streets along the way.

In honor of the 50th anniversary of the president’s death, CNN will be airing a documentary titled, “The Sixties: The Assassination of JFK,” tonight at 9 PM EST.