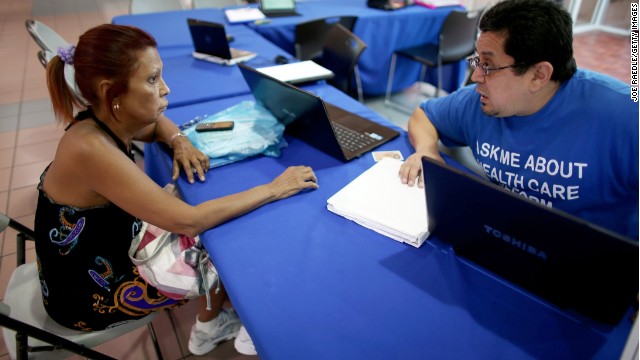 MIAMI, FL - NOVEMBER 05: Nayie Villa (L) speaks with Rudy Figueroa an insurance agent with Sunshine Life and Health Advisors as she looks to purchase an insurance policy under the Affordable Care Act at a kiosk setup at the Mall of Americas on November 5, 2013 in Miami, Florida. The insurance company was originally geared toward the Hispanic market but is expanding beyond that to specifically help people purchase and understand the policies offered under the Affordable Care Act. (Photo by Joe Raedle/Getty Images)
November 14th, 2013
09:32 AM ET

(CNN) - Public opinion of the federal health care law is growing more negative as a new poll indicates the gap between those who favor and don't favor Obamacare has become the widest it's been in the last year.

According to the Gallup poll released Thursday, 40% of Americans approve of the Affordable Care Act, while 55% disapprove.

Americans have long been divided over the law but the new numbers represent a significant shift. In December 2012, for example, 48% of Americans approved of Obamacare while 45% disapproved.

In the new poll, nearly three-quarters of Democrats, support the law, while only 39% of independents and 8% of Republicans agree.

Gallup also found that more Americans than before say health care is one of the country's top problems, increasing to 19% of Americans in November from 12% in October. In September, the number stood at 10%.

The change in opinion comes as the Obama administration plays defense over the botched HealthCare.gov rollout and questions over people losing their health insurance, despite being assured they wouldn't.

However, 26% of Americans say dissatisfaction with government is the most important problem facing the country, making it the Number One issue. The economy comes in third at 16%.

But Gallup notes that this month marks the first time since 2007 that non-economic issues have taken the top two spots among Americans' concerns.

The new poll results follow a string of other surveys that show troubling numbers for the Obama administration. A Quinnipiac University poll released Tuesday showed the president's approval rating had fallen to 39%, while a majority of voters said for the first time they don't consider the president honest and trustworthy.

Another Quinnipiac poll indicated Democrats were losing support in next year's midterm elections.

For the new Gallup numbers, Gallup surveyed 1,039 adults by telephone from November 7-10 as part of its annual Health and Healthcare Poll. The sampling error is plus or minus four percentage points.