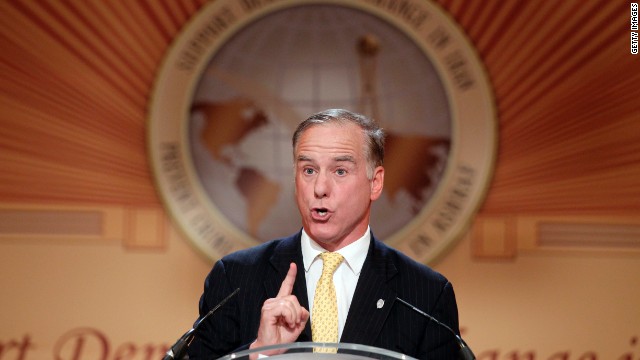 HOWARD DEAN: “I’D DO ANYTHING TO BE IN THE WHITE HOUSE” Howard Dean, in interview on Political Wire, speaks out against President Obama’s handling of health care reform:

Q: I bet you’re happy not to be the DNC Chair today?

DEAN: I’m happy not to be the DNC Chair, but I’d give anything to be in the White House and kick some serious butt over fixing this thing.

Q: What would you be telling them?

DEAN: I would be telling them, ‘OK you’ve apologized, now stop it and don’t do it again. And secondly, the website crashed, lots of websites crash. This is not atypical of a tech rollout so hire a whole bunch of people, put up a bunch of call centers and start enrolling people manually. Instead of doing this insurance policy, this junk insurance, because most of the insurance is junk where the policies have been cancelled. Instead of doing a forgiveness period or whatever and throwing the insurance industry into a tizzy, why don’t you just enroll these people manually? We could do that. There’s such thing as a toll-free line. There’s such thing as pencils and papers.”

DEAN: …. I’m not a lawyer but it’s a little hard for me to figure out how the president can undue deadlines in a bill. …

AND … STAGE RIGHT
MITT ROMNEY, IN AN INTERVIEW WITH CBS THIS MORNING, ABOUT OBAMA’S PROMISE TO KEEP YOUR INSURANCE: “That promise was not accurate. It was not honest, and the whole foundation of his second term, I think, is in jeopardy as a result of that,”

JOHN KING: FOR OBAMA, BAD TURN OR TIPPING POINT?
The question now consuming Washington is whether this is just a temporary bad turn or a tipping point.

In a more sympathetic take, a senior veteran of both Obama presidential campaigns and the first White House term put it this way: "I feel for him and my old colleagues. Tough when you're in the penalty box."

Less sympathetic, though, was another seasoned Democrat, this one a veteran of the Bill Clinton White House.

"They don't have the time, or the self-awareness," to objectively study and learn from recent mistakes, this longtime Democratic operative said of the President and his second-term team.

"What they do not appreciate is how far away they are from the end of the second term. We had not even had (Monica) Lewinsky yet at this point," the operative said, referring to Clinton's White House affair with an intern. – John King

THE BUZZ: BENGHAZI REWARD: The United States is offering up to $10 million for information that would lead to the arrest of any individual involved in the September 11, 2012 assault on the U.S diplomatic mission in Benghazi, Libya that left US Ambassador Christopher Stevens, and three other Americans dead.

Leading CNNPolitics: 150 years later, newspaper retracts editorial panning Gettysburg Address
In what might be one of the oldest corrections in the history of journalism, the editorial board of a Pennsylvania newspaper has retracted its predecessor's famous panning of President Abraham Lincoln's Gettysburg Address as "silly remarks." – Michael Pearson

Leading Drudge: CIA SPYING ON AMERICANS' FINANCIAL DATA
The Central Intelligence Agency is secretly collecting bulk records of international money transfers handled by companies like Western Union — including transactions into and out of the United States — under the same law that the National Security Agency uses for its huge database of Americans’ phone records, according to current and former government officials. – Charlie Savage and Mark Mazzetti

Leading CNNMoney: 3 hurdles Obamacare fix must overcome
President Obama now says that it's okay with him for people to keep their individual health insurance plans for another year. But he doesn't have the power to renew their policies. – Tami Luhby

- The government does not know best, you do -
WYOMING REPUBLICAN SENATE CANDIDATE LIZ CHENEY IN A PRESS RELEASE: “One of President Obama's most memorable promises, that under Obamacare you would be able to keep your insurance if you're satisfied, has turned out to be a complete lie … Millions of Americans are getting letters telling them their insurance plans have been cancelled. The Obama Administration has decided that your health insurance plan might not be adequate for you, even if you are more than content. The government doesn't know best, you do.”

- Director of NSA on leakers: 'We are at their mercy' -
DIRECTOR OF THE NATIONAL SECURITY AGENCY GEN. KEITH ALEXANDER: "Snowden has shared somewhere between 50 and 200,000 documents with reporters. Those will continue to come out. They’re being put out in a way that does the maximum damage to NSA and our nation … I don’t know how to stop it … When we look back on this people are going to see that and understand that and say what they did was wrong. Until then we are at their mercy."

- Bush: The return on investment in Afghanistan -
LAURA BUSH AT A PUBLIC DISCUSSION IN GEORGETOWN: “Just keep talking about it. I'm so worried that once our troops leave, no one will pay attention again to Afghanistan, and we just can't take that risk. And we don't want the people of Afghanistan to think that because our troops are leaving, they no longer matter to us, because they do matter.”

- ‘I'd eat my shoe -
MATT DAMON, IN AN INTERVIEW WITH JAKE TAPPER, IN RESPONSE TO CRITICISM FROM THE BUSH’S ABOUT SENDING HIS CHILDREN TO PRIVATE SCHOOL: “I'd eat my shoe if he could name a Bush that ever even walked into a public school.”

mike murphy ‏(@murphymike)
A hear a distinctive yowl rising in the bkgrd of the ACA debate... Howard Dean. I think he's gonna run.

Benjy Sarlin (@BenjySarlin)
House Republicans really hate the immigration bill because it - hey look, over there!

NewsHour ‏(@NewsHour)
Heads or tails? One town in Idaho is deciding who their mayor will be with a flip of a coin http://to.pbs.org/17WdQe4

Red Alert Politics ‏(@RedAlert)
Oprah Winfrey knows why Americans hate Obama these days – and it's not because of the Affordable Care Act. http://redalertpolitics.com/2013/11/15/watch-oprah-winfrey-claims-americans-hate-obama-because-he-is-black/ …

After graduatingWellesley College in 1969, Hillary Rodham Clinton spent the summer in Alaska, working various jobs including washing dishes at Mount McKinley National Park and processing salmon at a cannery.

Aside from politics, Clinton has had a multitude of jobs. According to her biography on Firstladies.org, she has also worked as a babysitter, an advisor to the Children’s Defense Fund, a volunteer at Yale’s Child Study center, a law professor and a lawyer.

With such a diverse resume, it’s no surprise that Secretary of State John Kerry offered advice to men on how to marry women like Clinton. At an event at Georgetown University Friday morning, Kerry joked, “For all the men … who sat in or who sit in classrooms where Bill Clinton sat so many years ago, my advice to you is this: Study hard, go to Oxford, become governor of your state, and then maybe you can marry one of the country's most remarkable Secretaries of State.”