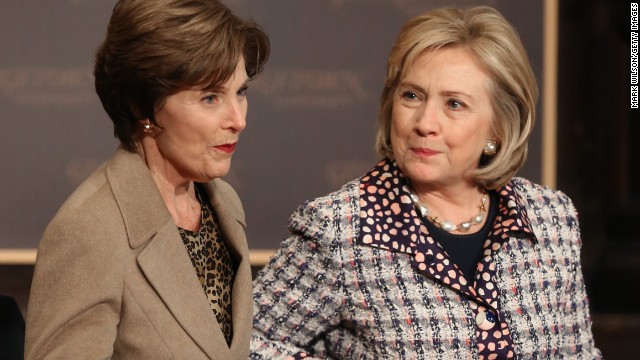 (CNN) - Former Secretary of State Hillary Clinton teamed up with fellow former First Lady Laura Bush on Friday for a public discussion about the future of security for Afghan women.

"I'm so worried that once our troops leave, no one will pay attention again to Afghanistan, and we just can't take that risk," Mrs. Bush said at a Georgetown University event in Washington.

"It's very, very important that we continue to support all the programs that were built in the last 10 years in Afghanistan," she added.

Bush and Clinton serve as honorary co-chairs of the U.S.-Afghan Women's Council and sat side-by-side on stage as they answered questions about the progress women have made in fighting violence and discrimination in Afghanistan.

As the United States winds down its combat operations over the next year and finalizes a bilateral security agreement, Mrs. Bush and her predecessor in the White House called on members of Congress and the international community to sustain the work women have done in the country.

"We need a virtual army now that the real army is leaving," she said.

For Clinton, a potential 2016 presidential contender, the event marked another opportunity to spotlight her foreign policy chops and strong involvement in women's issues.

Clinton: Helping women succeed is the 'great unfinished business of the 21st century'

The former Secretary of State said women in Afghanistan must continue to be included in current and future security talks, adding such negotiations are only effective when half the country's population is represented.

"We know that in the absence of women being at peace tables...it is less likely to succeed in terms of ending conflicts and providing security," she said

Secretary of State John Kerry separately delivered remarks at the event, saying it would be a tragedy to allow Afghanistan to regress.

"When Afghan women move forward, believe me, they never want to go back. Not to the days when the Taliban ruled Afghanistan," he said. "That is why it is so important that we keep investing in and defending the progress that empowers Afghan women as well as men."