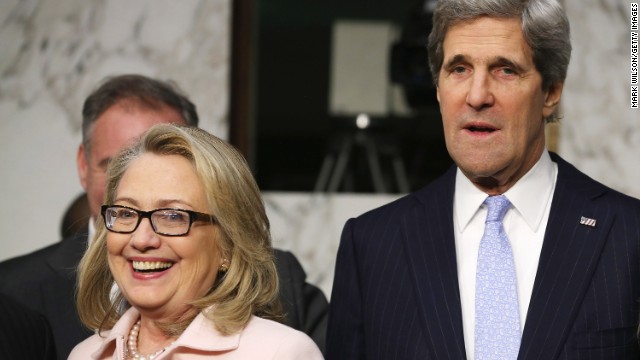 Kerry's advice on how to marry women like Clinton

(CNN) - Appearing at Georgetown University on Friday with predecessor Hillary Clinton, Secretary of State John Kerry gave some tips to the men at the school, where former President Bill Clinton also studied.

"For all the men...who sat in or who sit in classrooms where Bill Clinton sat so many years ago, my advice to you is this: Study hard, go to Oxford, become governor of your state, and then maybe you can marry one of the country's remarkable Secretaries of State," he joked.

Kerry was full of praise for Hillary Clinton after she introduced him at the event, which focused on progress made by women in Afghanistan. Referring to her as "Madam Secretary slash Senator slash First Lady slash everything," Kerry thanked her for her work in advocating for women and girls.

Former First Lady Laura Bush was also in attendance. She and Clinton serve as honorary co-chairs of the U.S.-Afghan Women's Council, and will take part in a public discussion at the Georgetown event.