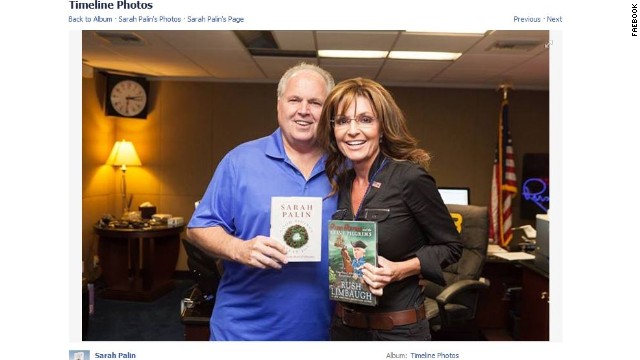 "Mega dittos from the EIB network headquarters in Florida!" the former Alaska Gov. wrote of her visit to Limbaugh's radio network. "Got to meet one of my heroes today, Rush Limbaugh. As I've said many times, I was a ditto-head before ditto-head was cool!"

Palin has been dipping her toes back into electoral politics in recent weeks after tentatively flirting with a 2012 bid for the Republican presidential nomination, a bid she ultimately abandoned before it began.

Most recently, the tea party favorite blasted President Barack Obama and the "church of government" at a conservative event in Iowa, the state that kicks off the presidential caucus and primary calendar.

Limbaugh is one of the most powerful voices in the conservative movement, with millions of people per week listening into his radio program.

In the photo, the two pose with their latest books. Palin has been touring the country to promote her Christmas-themed tome "Good Tidings and Great Joy: Protecting the Heart of Christmas," which she discussed in Iowa.

Limbaugh in turn held up his book, "Rush Revere and the Brave Pilgrims." "Great book for readers of ALL ages," Palin wrote. "Thank you, Rush, for all you do to educate Americans everyday on the things that make this nation so exceptional."