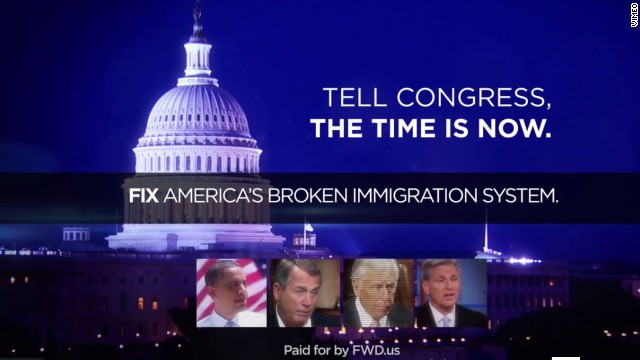 FWD.us announced Monday a new series of English and Spanish-language TV commercials called "We Wait" that it says will run on national cable and in some key local markets, as well as online. A source with knowledge of the group's efforts says FWD.us is spending six figures on the ad buy.

The 60-second spot starts with a narrator saying "on the need to fix our broken immigration system, there are signs both political parties in Washington get it."

It then uses a clip of President Barack Obama saying "Washington is lagging behind the country on this," and Boehner saying "this issue has been around far too long."

After the GOP lost last year's battle for the White House and failed to win back the Senate, thanks in part to a very poor performance with Hispanic voters, some Republican leaders said it was time for Congress to pass immigration reform.

In June the Senate passed an immigration reform bill, with some GOP support, that includes an eventual pathway to citizenship for most of the nation's 11 million undocumented immigrants. But thanks to fierce opposition from a large bloc of House conservatives, the bill appears dead in the House.

Last week Boehner not only repeated his long standing opposition to voting on the Senate measure, he went a step further by saying "I'll make clear we have no intention ever of going to conference on the Senate bill."

One of the most recent national polls on immigration, conducted earlier this month by Quinnipiac University, indicated that 57% said undocumented workers living in the U.S. should be allowed to stay in the country and eventually apply for citizenship.

Politico was first to report the new ad.

Zuckerberg, who backs FWD.us, has embraced immigration reform, telling CNN New Day anchor Chris Cuomo in August that  "my goal in this is to help support folks who care deeply about getting this done on both sides and hopefully we can make a difference."

"Eleven million undocumented people. That's a lot of people who's lives we can improve and make the country stronger," added Zuckerberg.