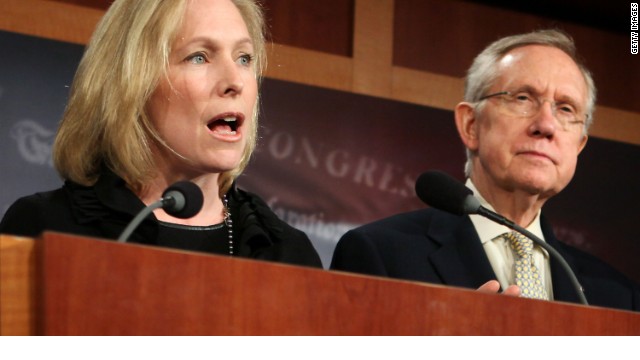 Senate Majority Leader Harry Reid, D-Nevada, told reporters that he would be backing Gillibrand's bill to take prosecution of sexual assault in the military out of the chain of command, a divisive measure that has opponents and supporters on both sides of the aisle.

I'm going to support @SenGillibrand's important amendment to combat the problem of sexual assault in the military.

Some in the military and elsewhere oppose the measure, arguing that it would undermine a commander's ability to lead effectively.

Reid's support of the Gillibrand bill puts him in opposition with fellow Democrat Sen. Carl Levin, the chair of the Armed Services Committee. Levin replaced an earlier provision by Gillibrand with one that would require prosecution decisions to be reviewed by more senior leaders and would make it a crime to retaliate against those who report assaults.

"People can disagree with my reasoning," Reid said, acknowledging that the committee did accomplish some things but "it can be improved."

"Not all commanders will have the determination that we saw the military brass pledge in the last hearing," she said in July. "Not every commander is going to understand that rape is a serious, violent crime of domination, often not even related to dating or romance; more often related to dominance and violence and power."

Gillibrand is now pushing to get her measure onto the floor of the Senate without going through the Armed Services Committee. It remains unclear whether the bill will get the 60 votes it needs to pass.