Again, the specter of a shutdown haunts the halls of Congress

Washington (CNN) - Hovering above Congress with the unpleasant scent of deja vu are concerns that current budget talks seem poised to fail and that the word "shutdown" is back on the rise.

At least if you live in one of the seven states that have rejected the President Barack Obama's proposal to allow health insurance companies to renew plans not in compliance with the Affordable Care Act.
END_OF_DOCUMENT_TOKEN_TO_BE_REPLACED

Health and Human Services Secretary Kathleen Sebelius paid a visit Tuesday to community health center in Florida where a group of navigators were helping local consumers sign up for health insurance through the federal exchange website - HealthCare.gov.

As she stopped to talk to one of the enrollees, the website temporarily crashed.
END_OF_DOCUMENT_TOKEN_TO_BE_REPLACED

"American leadership has been a force for tremendous good in the world," Rubio said, wondering aloud what kind of world we'd have today if the United States hadn't taken a leading role on the world stage.
END_OF_DOCUMENT_TOKEN_TO_BE_REPLACED

(CNN) - Sheriff's deputies had been called to the home of Virginia state Sen. Creigh Deeds a day before the fight that left his son dead and the veteran politician with multiple stab wounds, investigators reported Wednesday.

Deputies responded to a "nonemergency call for assistance" at Deeds' home in Millboro, in the rural western part of the state, on Monday, Virginia State Police said. The deputies made no arrests, and no charges were filed, the agency said.

WH: Obamacare is a cost-saver and job creator

Washington (CNN) - In the eyes of White House officials, it's just one of the untold upsides of Obamacare: The Affordable Care Act is already saving Americans money - they just don't know it.

In a report released Wednesday by Jason Furman, the president's new Chairman of the White House Council of Economic Advisers, the Obama administration claims health care spending grew at a pace of 1.3% per year between 2010 and 2013, the lowest rate on record since 1965.

END_OF_DOCUMENT_TOKEN_TO_BE_REPLACED 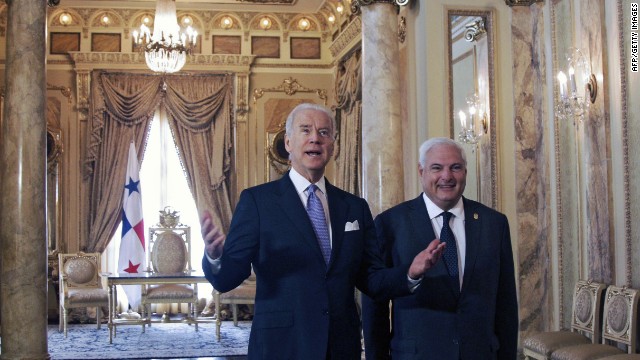 On a visit to Panama on Tuesday, Biden was questioned about a possible 2016 presidential run.

END_OF_DOCUMENT_TOKEN_TO_BE_REPLACED

Washington (CNN) - The failed referendum in Albuquerque, New Mexico, to ban abortions after 20 weeks of pregnancy is the first known instance of the issue being addressed at a local level, but it might not be the last.

"This is one of my favorite events every year," said the President. "This year it's just a little more special, because this marks the 50th anniversary of President Kennedy establishing this award."
END_OF_DOCUMENT_TOKEN_TO_BE_REPLACED

Washington (CNN) - Senate Majority Leader Harry Reid, frustrated by Republicans who have been blocking President Barack Obama's nominees, could invoke the so-called "nuclear option" this week - a controversial move that would change Senate rules over GOP objections to prevent filibusters of presidential nominations, according to one senior Democratic aide and another Democratic source.