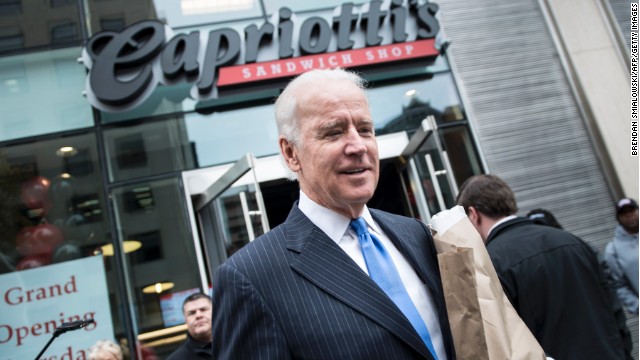 Down a few bucks, Biden borrows some change for a hoagie

(CNN) - Amid a contentious day on Capitol Hill following the Senate's fight over filibuster rules, Vice President Joe Biden stole away from the White House Thursday to buy some subs from one of this favorite sandwich shops from back home.

The Vice President rang up just over 50 dollars worth of subs at Capriotti's, a Delaware-based Italian hoagie chain, on it's opening day in downtown Washington DC. Biden pulled out some cash to pay and realized he was short a few bucks.

"Fran, you got ten bucks?" Biden called out to his personal aide, Fran Person.

The former longtime senator from Delaware raved about his home state's subs after ordering a few Italian sandwiches and a large "Bobbie", a Thanksgiving-inspired concoction, with hot peppers on the side. Biden said he was having lunch with the President and was going to bring one back to the White House for him.

Asked by a reporter about Senate Democrats passing filibuster reform, Biden stayed focused on the hoagies.

"They're going to learn to eat Capriotti's, is what's gonna happen in the Senate," Biden said, according to a White House pool report.