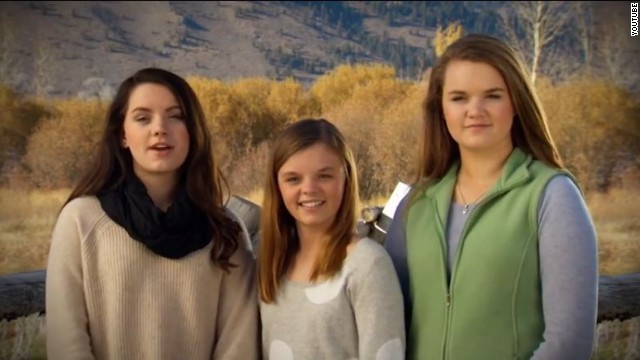 (CNN) - Republican Senate candidate Liz Cheney is going up with a new campaign commercial that touts her family's Wyoming roots and showcases her three daughters.

The release of the TV ad comes one week after Cheney, the daughter of former Vice President Dick Cheney, was involved in a very public spat over same-sex marriage with her younger sister Mary, who's married to another woman.

Cheney rocked Wyoming politics this summer by announcing a primary challenge to three-term incumbent GOP Sen. Mike Enzi in next year's midterm elections. She has since faced criticism for carpet bagging, moving from her long-time residence in Virginia to Wyoming about year before announcing her Senate bid.

The ad starts with each of Cheney's three daughters highlighting the family's long history in Wyoming, which they say dates back to 1852.

The commercial closes with Cheney, standing with her husband, three daughters, and two younger sons, in front of the beautiful Wyoming landscape, saying I'm Liz Cheney and I approve this message."

Cheney's campaign put out a statement Monday saying the spot "will appear on television in Wyoming beginning today."

The spat between Liz and Mary Cheney started eight days ago, when the candidate said that while she supports some rights for same-sex partners, she does not back the right for same-sex couples to legally marry.

"I love Mary very much. I love her family very much. This is just an issue in which we disagree," Cheney added on "Fox News Sunday."

"Liz - this isn't just an issue on which we disagree - you're just wrong - and on the wrong side of history," she posted on Facebook.

Mary Cheney married her longtime partner, Heather Poe, last year in Washington D.C., which legalized same-sex marriage in 2009. The couple have two children together - a son, Samuel, and a daughter, Sarah.