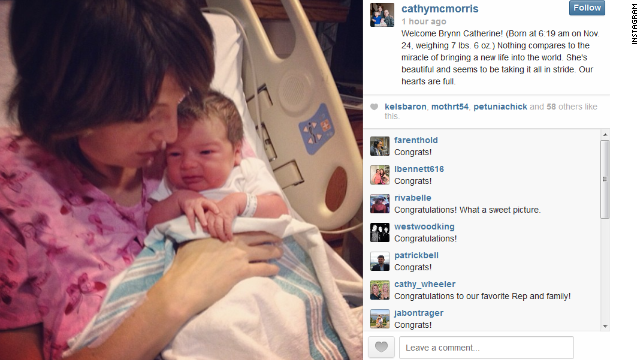 Rep. McMorris Rodgers posted an announcement on Twitter, along with an Instagram picture of her holding her new daughter with the message, "Welcome Brynn Catherine! (Born at 6:19 am on Nov. 24, weighing 7 lbs. 6 oz.) Nothing compares to the miracle of bringing a new life into the world. She's beautiful and seems to be taking it all in stride. Our hearts are full."

We are thrilled to welcome Brynn Catherine to our family! (Born Nov. 24, weighing 7 lbs. 6 oz.) Our hearts are full. http://t.co/njktNBtOLl

The baby arrived two weeks early, according to an aide to McMorris Rodgers, who says both mom and baby are "doing very well."

The use of social media to unveil the news was not surprising. The five-term congresswoman from Washington state, who heads up messaging efforts for her party in her post as conference chair, has made a major push for House Republicans to include Twitter, Facebook and Instagram as part of their communications strategies.

Rep. McMorris Rodgers and husband Brian Rodgers welcomed their first child, son Cole in 2007, who was born with Down Syndrome. Their daughter Grace arrived in December 2010, when McMorris Rogers served as vice chair of the House GOP Conference, marking the first time a member of House leadership delivered a baby.

An aide to Rep. McMorris Rodgers says she still plans to continue in her post as conference chair, and plans to run for a sixth term to represent the fifth district in Washington State in 2014.