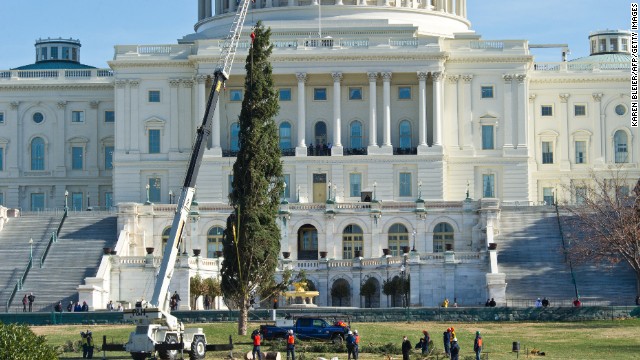 House Speaker John Boehner will preside over the illumination the evening of December 3.

The 79-year-old Engelmann spruce was selected in August, and for the past few weeks has been on a 5,000 mile goodwill trip from Colville National Forest, stopping at more than two dozen points along the way from the Pacific Northwest.

Finally, Monday morning, with a police escort, a tractor-trailer 103 feet long started up from an overnight parking space on the National Mall and made its way to the edge of the Capitol lawn as cameras covered the arrival.

A large construction crane was parked on the lawn itself to hoist and then move the 88-foot tree from the flatbed trailer to its display location at the West Front.

The tree will be decorated with about 10,000 lights and thousands of handcrafted ornaments from the people of Washington state.

Public donations and corporate sponsorships have covered about $400,000 of the expense, says Jeff Olson, president of "Choose Outdoors," a non-profit group that encourages people to enjoy public lands and other outside recreation.

Olson's group helped organize the fundraising to bring the tree to the U.S. Capitol, including Mack Truck's donation of two, brand-new, 18-wheelers. Alaska Airlines donated tickets to get the transport crews home to Washington State.

Riding along in the big rig for part of the way, Olson said the CB-radio brought "lots of comments about how much this is costing us as taxpayers," including some unkind speculation about certain politicians.

"So it's great, when you hear that, and you're able to respond 'this is paid for by the private sector,'" Olson said.