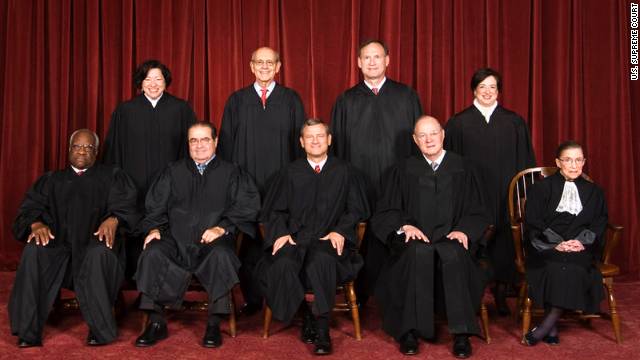 REVERSAL OF FORTUNE: DEMOCRATS LOSE 2014 EDGE FOLLOWING OBAMACARE UPROAR Democrats a month ago held a 50%-42% advantage among registered voters in a generic ballot, which asked respondents to choose between a Democrat or Republican in their congressional district without identifying the candidates.But the Democratic lead has disappeared. A new CNN/ORC poll released today indicates the GOP now holds a 49%-47% edge.

The 10-point swing follows a political uproar over Obamacare, which included the botched rollout of HealthCare.gov and controversy over insurance policy cancellations due primarily to the new health law. – Paul Steinhauser

SCOTUS AGREES TO HEAR HOBBY LOBBY CASE ABOUT COVERING CONTRACEPTIVES: The justices Tuesday agreed to review provisions in the Affordable Care Act requiring employers of a certain size to offer insurance coverage for birth control and other reproductive health services without a co-pay. At issue is whether private companies and non-profits can refuse on the claim it violates their religious beliefs. Oral arguments will likely be held in March with a ruling by late June. – Bill Mears

READ HER LIPS, HEALTHCARE.GOV 'DEFINITELY ON TRACK:'
Health and Human Services Secretary Kathleen Sebelius said Tuesday that "we are definitely on track to have a significantly different user experience by the end of this month" with the problem-plagued Obamacare website. In a conference call with state and local officials, Sebelius added that "this isn't a magic 'turn on the on switch'" to fix HealthCare.gov and that "the experience is vastly improved each day."

THE BUZZ: Lara Logan and her producer Max McClellan will be taking a leave of absence from 60 Minutes following an internal report released by CBS News describing the inaccuracies of the Benghazi report Logan and McClellan aired last month. CNN’s Brian Stelter has the full internal memo sent to CBS News: cnn.it/1eooKb0

MSNBC BIDS FAREWELL TO ALEC BALDWIN: Baldwin’s representative Matthew Hiltzik told CNN in a statement “We are jointly confirming that UP LATE will not continue on MSNBC … This is a mutual parting and we wish Alec all the best.”

TRAIL TRIVIA
(Answer below)
Who famously argued that the national bird should be a turkey instead of a bald eagle?

Leading Drudge: SUPREMES TO TAKE ANOTHER CRACK AT OBAMACARE
The Supreme Court agreed Tuesday to referee another dispute over President Barack Obama's health care law, whether businesses can use religious objections to escape a requirement to cover birth control for employees. – Mark Sherman

Leading Richmond Times-Dispatch: Creigh Deeds: Mental health system must change
State Sen. Creigh Deeds, D-Bath, recovering from multiple stab wounds and the death of his son, has served notice that he intends to push for change in a mental health system that doesn’t work for the people it’s supposed to help. … “I am alive for a reason, and I will work for change,” Deeds told The Recorder, based in Monterey. “I owe that to my precious son.” … “I cry a lot,” Deeds told The Recorder. “I can’t focus now and talk to anyone.” – Michael Martz

- Pope calls for major changes in the Roman Catholic Church -
POPE FRANCIS IN A NEW 85-PAGE DOCUMENT: "I prefer a Church which is bruised, hurting and dirty because it has been out on the streets, rather than a Church which is unhealthy from being confined and from clinging to its own security ... I do not want a Church concerned with being at the centre and then ends by being caught up in a web of obsessions and procedures ..." Read the full document here.

- Exporting Hollywood -
PRESIDENT BARACK OBAMA AT AN EVENT AT DREAMWORKS: “Entertainment is one of America's biggest exports. Every day you sell a product that's made in America to the rest of the world. Every time somebody buys movie tickets or DVDs or distribution rights to a film, some of that money goes back to the local economy right here and believe it or not entertainment is part of our American diplomacy. It's part of what makes us exceptional, part of what makes us such a world power.”

- State cautions Congress on passing new Iran sanctions -
STATE DEPARTMENT SPOKESWOMAN JEN PSAKI AT A TUESDAY BRIEFING
“Passing any new sanctions legislation during the course of the negotiations, in our view, would be unhelpful and put the success of the outcome at risk.”

D Wasserman Schultz ‏(@DWStweets)
With the Hobby Lobby vs. Sebelius case, I fully expect SCOTUS to side with the American people. http://j.mp/1iPub6g #StandWithWomen

Aaron Blake (@AaronBlakeWP)
Chris Christie got half the Latino vote this month. Now he faces vetoing the Dream Act. wapo.st/1gfJkf1

EJ Dionne ‏(@EJDionne)
#PopeFrancis Why is it "not a news item when an elderly homeless person dies of exposure, but it is...when the stock market loses 2 points?"

FLOTUS ‏@FLOTUS
As families begin to gather for Thanksgiving, I’m thinking of the brave #Fast4Families immigration reform advocates. We're with you. -mo

Benjamin Franklin wrote in a letter to his daughter in 1874 that he would prefer a turkey to be the national bird instead of an eagle.

“For my own part I wish the Eagle had not been chosen the representative of our country. He is a bird of bad moral character … I am on this account not displeased that the figure is not known as a Eagle, but looks more like a Turkey. For the truth the Turkey is in comparison a much more respectable bird, and withal a true original native of America ... He is besides, though a little vain & silly, a bird of courage, and would not hesitate to attack a grenadier of the British Guards who should presume to invade his farm yard with a red coat on.”

Continuing a 66-year a tradition, the National Turkey Federation presented two turkeys to the President today. The birds will receive a presidential pardon tomorrow. In the meantime, the White House has set up a page on their website that lets people vote on which turkey will be named the official “National Thanksgiving Turkey.”