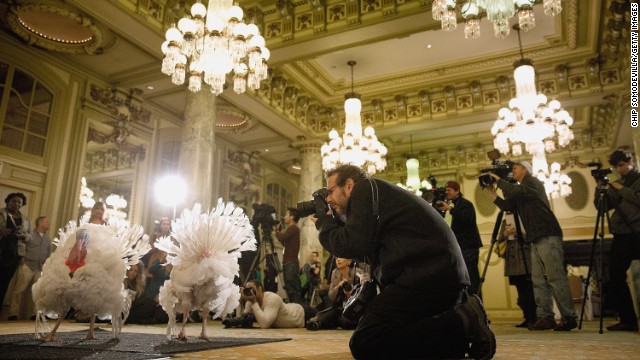 That's because the guests of honor at this particular event were two turkeys, Popcorn and Caramel, soon to be named the official and alternate National Thanksgiving Turkeys.

For the 66th consecutive year, the National Turkey Federation (NTF) is presenting the birds to the President and his family as part of a time honored tradition that officially dates back to the Truman administration-although some maintain it may have been started by President Abraham Lincoln.

The lucky birds will receive a presidential pardon at the White House tomorrow, saving them from a grisly fate all-too-common for turkeys this time of year-becoming the centerpiece of a Thanksgiving Day meal.

Instead of being roasted, stuffed and served with a side of mashed potatoes, Popcorn and Caramel will live out the rest of their short lives in a custom-made enclosure at Morven Park in Virginia, after making a Christmas appearance at George Washington's Mount Vernon Estate.

The ceremony tomorrow is a special occasion for the Burkel family, who raised the turkeys on their farm in Badger, Minnesota.

John and Joni Burkel were on hand Tuesday for Popcorn and Caramel's media debut, along with their five children, to answer questions on behalf of their feathered friends.

Mr. Burkel described the birds' eclectic taste in music (they listened to everything from Vivaldi to Lady Gaga as part of their socialization process), and their overall temperament. Caramel, it seems, is the more laid-back of the two, while Popcorn "struts a little more."

Only one of the turkeys can be the official National Thanksgiving Turkey, and in true democratic fashion, the White House is leaving that decision to the American people. The public is invited to vote for their favorite on Facebook or Twitter, using the hashtags #TeamCaramel or #TeamPopcorn.

Asked which turkey was most deserving of the honor, John Burkel said diplomatically, "They're both ready," but added that he is partial to Popcorn.

The youngest Burkel children, 10-year-old Jack and 5-year-old Emily took charge of the turkeys during the press conference, corralling them onto their mats and whistling so they'd gobble for the cameras.