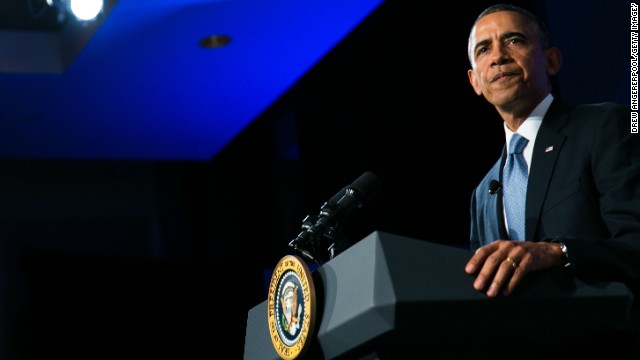 GOP Consultant Mike Murphy’s Take: “Obamacare Is a GOP Jackpot:”
“Without even buying a ticket, the GOP has won the Powerball of politics. But in our happy delirium, we Republicans should be brutally honest with ourselves. Democrats are flailing right now–but that doesn't mean Republicans are in control. We didn't earn this. Sure, we were right about Obamacare. But telling the country what we are against is only a start. To really run the table and take back the White House and the Senate, the GOP must do the hard work of a true party reset. If we don't, a big Democratic comeback in 2016 is quite likely, even with the failures of Obamacare.”

The People’s Take: Jury’s Out on Obamacare: Polling Director Keating Holland writes about the new CNN/ORC poll: “Support for Obamacare remains low, although Americans seem to have an open mind on whether it will eventually work and most think that the current problems the system faces can eventually be solved. Currently, 40% favor the new health care law - pretty much the level of support Obamacare has faced for months. And with 14% saying that they oppose the new law because it is not liberal enough, that leaves only four in ten who agree with the GOP that the law is bad because it is too liberal. Is the new law a success or failure? 39% say it is a failure, with 53% saying it is too soon to tell. Will the current problems faced by Obamacare be eventually solved? 54% express optimism on this question; 45% believe that Obamacare's flaws will never be fixed.”

MEANWHILE … IN THE BATTLE FOR THE BUCKEYE: In the crucial swing state of Ohio, voters are practically split between Hillary Clinton and Chris Christie in a hypothetical 2016 presidential matchup, according to a new survey. – Ashley Killough

THE BUZZ: Mike Huckabee announces his radio show is over.
Huckabee writes on his Facebook page: “The Mike Huckabee Show on radio, which was heard 3 hours a day on over 200 radio stations across the country since April of 2012 will conclude its run at the end of the final show on Thursday, December 12.”

TRAIL TRIVIA
(Answer below)
Which NFL team is credited with starting the Thanksgiving football game tradition?

Leading CNNPolitics: In cash blitz, Obama rakes it in for Democrats
President Barack Obama's approval rating may be struggling, but he's still bringing in money on the fundraising trail. For the past month, the President has been crisscrossing the country raising cash for Democratic campaign groups. At 13 separate events in eight cities, he may have helped raise up to $21.6 million. – Ashley Killough and Kevin Liptak

Leading Drudge: OBAMACARE HOLIDAY PRIZE: FREE CONDOMS
The Obamacare event took place at the University of Central Arkansas last weekend. It was hosted by a group called the Living Affected Corporation, which apparently has received a grant from the federal government to educate the public about Obamacare. The event organizer spilled out a bag of condoms - as a couple whoops and hollers could be heard from the small crowd. – Daniel Halper

Leading HuffPo: Obama Has Pardoned Almost As Many Turkeys As Drug Offenders
Despite the administration's recent talk of reforming the criminal justice system, Obama has granted the fewest pardons of any modern president. Of the 39 pardons Obama has granted, just 11 have been for people convicted of drug crimes, according to Department of Justice records. He's granted 10 turkey pardons, sparing the birds from Thanksgiving execution to live out their lives on a farm. – Ryan J. Reilly

- Thanksgiving prep: What Obama really said about immigrants -
PRESIDENT BARACK OBAMA ON TUESDAY: "As I was getting a tour of DreamWorks, I didn't ask, but just looking at faces, I could tell there were some folks who are here not because they were born here, but because they want to be here and they bring extraordinary talents to the United States. And that's part of what makes America special."

How it’s being circulated online: “Obama says he can identify immigrants just by looking at their faces … Grab your ‘what if a Republican had said that?’ file, because we have a red hot entry.”

- FL GOP Chairman calls for Radel to resign -
CHAIRMAN OF THE REPUBLICAN PARTY OF FL LENNY CURRY IN A NEWS RELEASE MONDAY NIGHT: "The people of Florida's 19th Congressional District need a Congressman who is 100 percent focused on the needs of Southwest Florida ... Therefore, Congressman Radel should step down and focus his attention on rehabilitation and his family."

- FL Gov. Scott agrees with FL GOP -
FL. GOV. RICK SCOTT TO REPORTERS AT A CEREMONIAL GROUNDBREAKING TUESDAY IN ESTERO, FL: "I agree with the party chairman ... Look, Trey is going through a tough time. My prayers and my wife's prayers are with his family. But we have to hold all of our elected officials to the highest standards."

Science Channel ‏(@ScienceChannel)
The average American will consume about 2,500 calories at Thanksgiving dinner. How to prep your body: http://ow.ly/reA0K

Hala Gorani (‏@HalaGorani)
Gap's response to the racist defacing of one of their ads is pretty cool: http://huff.to/1exbFgg via @HuffPostRelig

In 1934, George A. Richards, owner of the Detroit Lions, scheduled the first professional football game for his team against the Chicago Bears on Thanksgiving Day.

Richards, a local radio executive, purchased the Portsmouth Spartans of Portsmouth, Ohio and moved the team to Detroit, renaming the team the Detroit Lions. While Richards acknowledged some risks in scheduling a game on Thanksgiving Day, he thought that doing so would provide some much-needed exposure to the team that was battling the Detroit Tigers baseball team for the city’s attention.

With an understanding of the power of radio publicity, Richards teamed with NBC Radio to broadcast the game. The tradition of the Thanksgiving football game began following the success of the game’s popularity that day. Tomorrow the Detroit Lions will play the Green Bay Packers in Detroit, the Dallas Cowboys will play the Oakland Raiders in Dallas, and the Baltimore Ravens will play the Pittsburgh Steelers in Baltimore.

Carrying on the tradition, NBC Sports Radio in Detroit will be simulcasting local affiliate, WestwoodOne’s coverage of the game in Detroit tomorrow.

Congrats to Steve Liguori (@SteveL3877) and Joe Kildea (@kildea) for correctly answering today’s Gut Check Trivia question. We are off tomorrow to celebrate with our families, and we shall toast you, our loyal readers, in our thanks.