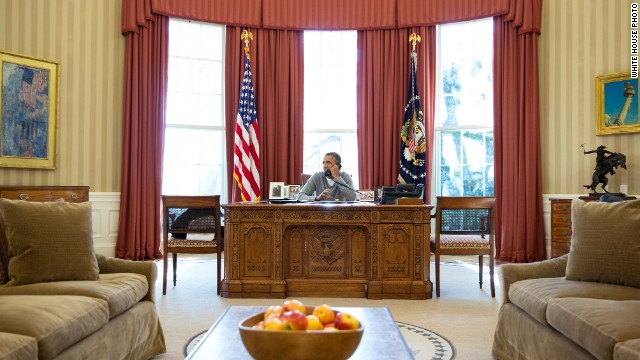 (CNN) - President Barack Obama called members of the U.S. military Thursday to thank them for their service and wish them a happy Thanksgiving.

Obama and his family spent a quiet Thanksgiving at the White House, feasting on a traditional spread, including turkey, honey-baked ham, cornbread stuffing and nine types of pies.

On Wednesday, the first family volunteered at a food distribution center in northwest Washington. Obama, joined by the First Lady and daughters Sasha and Malia, packed and handed out bags of food to families in need.

The South Lawn of the White House was illuminated Wednesday evening with a the National menorah, marking the first night of Hanukkah and the start of the Jewish lunar calendar.

Thursday is the beginning of Hanukkah and Thanksgiving, and is the last time for 70,000-plus years the two holidays will fall on the same date.