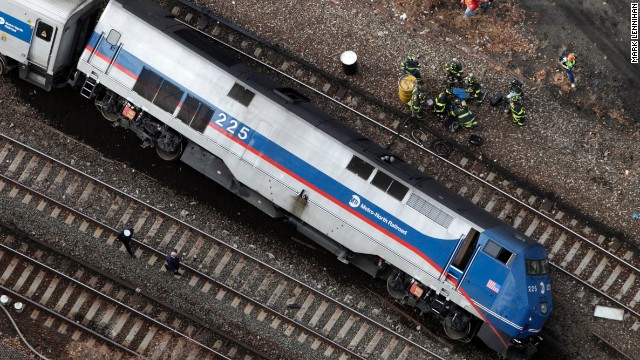 BREAKING … METRO NORTH TRAIN WAS TRAVELING AT 82 MPH WHEN IT DERAILED: The commuter train involved in a deadly weekend derailment in the Bronx was doing 82 mph as it entered the 30-mph curve where it jumped the tracks, federal safety officials said Monday.
The NTSB is not currently aware of any problems or anomalies with the breaks on the Metro North train that derailed Sunday, according to board member Earl Weener.

SEN. CHUCK SCHUMER, D- NEW YORK: “When I heard about the speed, I gulped. It sort of takes your breath away.”

THE BUZZ: GOP’s ROSA PARKS TWEET BACKFIRES: As the Republican National Committee has been working to expand its outreach to African-Americans, it now finds itself playing defense after a well-intentioned but unpolished tweet honoring the legacy of Rosa Parks seemed to ignite some backlash. The RNC on Sunday, commemorating the day Parks was arrested in 1955, sent out a tweet to recognize the civil rights activist.

"Today we remember Rosa Parks' bold stand and her role in ending racism," its Twitter page read. Attached was a photo of a young Parks.

A few hours after the original tweet, the RNC tweeted a clarification on the latter end of the statement.

"Previous tweet should have read "Today we remember Rosa Parks' bold stand and her role in fighting to end racism," the tweet stated.

Leading Star Ledger: Christie's flip-flop on immigration: Editorial
When the governor was seeking the Latino vote weeks ago, he assured advocates he’d support New Jersey’s version of this bill. But now that he’s been re-elected with 51 percent of the Hispanic vote, he’s backpedaling. Christie told a radio station last week that he would not sign the Dream Act, which passed the state Senate and is expected to be taken up soon by the Assembly, for reasons that make no sense. – Star-Ledger Editorial Board

Leading WMUR: Fmr U.S. Sen. Bob Smith changes mind, will challenge Shaheen
Former New Hampshire Republican senator Bob Smith said he has changed his mind and will try to defeat Democratic incumbent Jeanne Shaheen for his old seat next year. Smith told WMUR Political Scoop on Sunday that he had made a decision not to run largely to get out of the way for other candidates, but as weeks came and went no major candidates got into the race, and he kept getting encouragement to run. – James Pindell

Leading Drudge: NTSB: Train going too fast at curve before wreck
The National Transportation Safety Board says a train that derailed in New York City was traveling 82 mph as it approached a 30 mph zone.
The Metro-North Railroad commuter train jumped the tracks Sunday morning along a sharp curve where the speed limit drops from 70 mph to 30 mph. Four passengers died.

Leading The New York Times: Insurers Claim Health Website Is Still Flawed
The site appears easier to use for most people, but problems in the systems that deliver consumer information to insurers still have not been fixed. – Robert Pear and Reed Abelson

- Adviser: People are as mad as hell -
ROB COLE, ADVISER TO DEMOCRATIC INCUMBENT GEORGE DEMOS' CAMPAIGN ON HIS NEW AD, IN A STATEMENT: "I wouldn't say that we're comparing them ... We're just saying these three people are politicians ... just think people are fed up with politicians, and that's the point."

–Gates on Jeff Bezos’ Delivery by Drone concept -
BILL GATES TO CNN’s JOHN BERMAN: “Physical products delivered by drone, I would say he's probably on the optimistic or perhaps overoptimistic end of that. It's great that people have dreams like that. If we can make the cost of delivery easier, then it's not just books, it's getting supplies out to people in tough places. Drones overall will be more impactful than I think people recognize in positive ways to help society.”

- The Sunday sound people still are buzzing about -
SEN. DIANNE FEINSTEIN, MEMBER OF THE SELECT COMMITTEE ON INTELLIGENCE, TO CNN’S CANDY CROWLEY ON SUNDAY: I think terror is up worldwide, the statistics indicate that, the fatalities are way up. The numbers are way up. There are new bombs, very big bombs, trucks being reinforced for those bombs. There are bombs that go through magnatometers. The bomb maker is still alive. There are more groups that ever and there's huge malevolence out there.

– Bergen Reaction: Not necessarily a real threat to U.S. -
CNN’S NATIONAL SECURITY ANALYST PETER BERGEN TO CNN’S WOLF BLITZER: “Clearly al Qaeda, in places like Iraq and Syria, is building the truck bombs described by Senator Feinstein and is unfortunately enjoying a renaissance in both countries. The next question though, is to what extent is that a threat to the United States? And for the moment, these groups are being very focused on overthrowing the Assad government in Syria or attacking the largely Shia led government in Iraq and they've shown no indication of a willingness to attack the United States or even any interest so far. They have recruited a very small number of Americans to fight in Syria. Maybe ten. We've had an American citizen die in Syria fighting alongside one of these groups.”

maggie haberman ‏(@maggiepolitico)
Asked about Bloomy absence yesterday, de Blasio says "I'll let the current mayor speak for himself about his choice. For me it would be..."

maggie haberman (‏@maggiepolitico)
"...generally important to be there...my instinct in these things is to" be present.

Charlie Spiering ‏(@charliespiering)
PIC -> What http://Amazon.com would look like on Cyber Monday if it was created by http://healthcare.gov team pic.twitter.com/eL6mGwX4Rn

Mark Teixeira ‏(@teixeiramark25)
Can an Amazon Drone deliver me to #Yankee Stadium every day? That would really cut down on my commute.

Ray Lawson ‏(@Lawsonbulk)
House will meet 126 days next year with 239 days off. Slightly more work days then this year

President Obama tapped Zients to oversee the improvements to the healthcare.gov website that launched on October 1st.

Zients is the former deputy director of the Office of Management and Budget. He joined the White House in 2009 with the mission of improving federal bureaucracy through technology. Starting January 1, 2014, Zients will be replacing Gene Sperling as the Director of the National Economic Council under the President of the United States.

Zients’ wife, Mary Menell, grew up in South Africa and came to the United States for high school. Menell grew up in a prominent South African family. Her parents are friends with the Mandela’s.