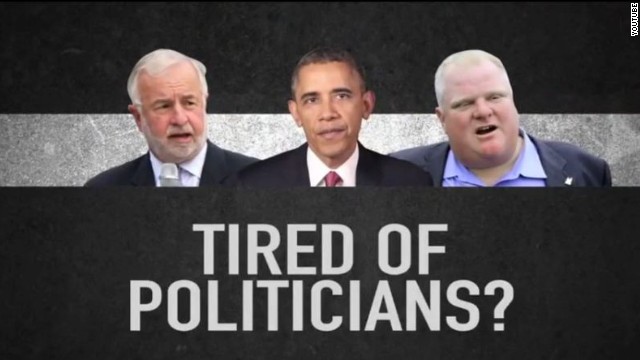 "Tired of politicians?" the ad's narrators asks, as the screen features side-by-side images of Bishop, Obama and Ford.

"Then look at George Demos. He's not a politician," the narrator continues, referring to the GOP congressional candidate.

Demos, a former federal prosecutor for the Securities and Exchange Commission, is running for the GOP nomination to challenge six-term Bishop in New York's 1st Congressional District, which covers the eastern end of Long Island.

Demos also ran for the seat in 2010, but lost in a crowded Republican primary. He announced another bid in the 2012 cycle but dropped out of the race before the primary.

Rob Cole, an adviser to the Demos campaign, said the ad doesn't exactly compare Obama and Bishop to Ford.

"I wouldn't say that we're comparing them...We're just saying these three people are politicians," he said. "I just think people are fed up with politicians, and that's the point."

He bemoaned "corruption in politics" and pointed to a House Ethics Committee investigation of Bishop. The congressman has been under fire for allegedly soliciting a $5,000 campaign donation from a supporter in return for helping the supporter's family get a permit to set off fireworks at their son's bar mitzvah celebration.

In July, Bishop said, "I welcome a fair-minded review of the facts because I have done nothing wrong."