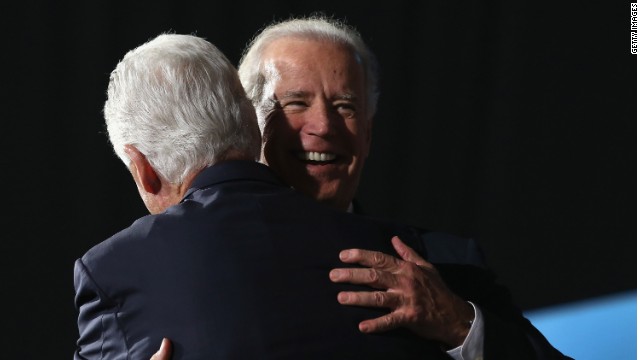 SOURCES: TRAIN ENGINEER SAID HE WAS 'IN A DAZE' BEFORE CRASH Results from alcohol breath tests for the train engineer of the New York commuter train that derailed Sunday morning were negative, and both the brake and signal systems in the deadly Metro-North accident appeared to be working, National Transportation Safety Board representatives said Tuesday.
Meanwhile, while two law enforcement sources told CNN that engineer William Rockefeller reported being in a "daze" before the crash.
– CNN’s Shimon Prokupecz. Mike Ahlers and Ray Sanchez

CLINTON ON OBAMACARE: “I WAS TRYING TO BE SUPPORTIVE”
Former President Bill Clinton on Tuesday defended his controversial comments in which he said early last month that President Barack Obama "should honor" his promise to Americans that if they liked their health insurance plans, they'd be able to keep them under the Affordable Care Act.
"I was trying to be supportive of it," Clinton said, referring to the law better known as Obamacare in an interview with CNN Español’s Juan Carlos López.
“I don't think you can find anybody in America who has worked harder for (Obama's) re-election or supported this bill or went out of his way to explain the bill to the American people more than I did," Clinton continued. …
"I've got a lot at stake here personally," he added. "And the work I have done for health care and the work I've tried to support and the support I've tried to give the President – and Hillary does, too. We've been working on this health care thing for 20 years."

OBAMACARE OFFENSIVE: President Barack Obama launched a three-week campaign intended to highlight the benefits of the 2010 Affordable Care Act with a White House event on Tuesday, saying “Obamacare” is here to stay: "I've always said I will work with anybody … You've got ideas? Bring them to me. Let's go. But we're not repealing it as long as I'm President."

In a blog post, the Department of Health and Human Services announced that more than 1.46 million people have been added to Medicaid and Children's Health Insurance Program rolls due to expanded services under the health care reforms.

NEW POLL: PUBLIC SEES U.S. POWER DECLINING
According to a new Pew Research Center poll, support for U.S. engagement globally has fallen to a historic low, with a growing number of Americans believing that U.S. power is declining. Despite that negative attitude, the poll also indicates that more Americans still feel that the benefits from U.S. participation in the global economy outweigh the risks.

THE BUZZ: CHRISTINE FOX, THE INSPIRATION FOR ‘TOP GUN’ CHARACTER GETS TOP-LEVEL PENTAGON POST: The inspiration for the role played by Kelly McGillis role in the 80s blockbuster movie “Top Gun,” has become the first woman appointed to the Pentagon’s No. 2 job. – CNN’s Laura Koran

TRAIL TRIVIA
(Answer below)
Who gave Caroline Kennedy her famous pony, “Macaroni,” that she rode frequently on White House grounds?

Leading Drudge: GUARDIAN EDITOR: WE'VE ONLY PUBLISHED 1% OF SNOWDEN FILES
The editor of the Guardian said Tuesday his newspaper has published just 1 percent of the material it received from former National Security Agency contractor Edward Snowden, and denied the paper had placed lives or national security at risk.

Leading Washington Post: In Cheney family feud over same-sex marriage, Heather Poe isn’t holding her peace
For 21 years, Heather Poe, a low-key former UPS supervisor from Colorado, has been partnered with Mary Cheney, daughter of Dick Cheney — and thus conjoined with one of the nation’s highest-profile political families. Yet Poe’s most publicly known trait is that she does not want to be publicly known. – Richard Leiby

- Clinton on 2016: Don’t start believing -
FORMER PRESIDENT BILL CLINTON IN AN INTERVIEW WITH CNN’s JUAN CARLOS LOPEZ: “I think it's a big mistake, this constant four-year, peripatetic campaign is not good for America. We need to deal with the business we have before us.”

- N.Y. Gov. Cuomo delivers a stand-down order–
N.Y. GOVERNOR ANDREW M. CUOMO IN A STATEMENT REQUIRING ALL MTA EMPLOYEES TO PARTICIPATE IN SAFETY BRIEFINGS: “Since the crash, the State has been taking new precautions to protect the safety of New York commuters and devoting every resource at our disposal to expedite restoration efforts. At my direction, the MTA will be implementing a Safety Stand-down that will require all employees to participate in safety briefings.”

- Goldman Sachs CEO dishes on America’s biggest financial problem -
GOLDMAN SACHS CEO, LLOYD BLANKFEIN AT A WALL STREET INDUSTRY CONFERENCE: "This country does a great job of creating wealth, but not a great job of distributing it.”

- Re-election message: 'Tis not the season for politicians -
D.C. MAYOR VINCENT GRAY IN AN EMAIL TO SUPPORTERS: “We are better off today than we were just three years ago ... We will formally launch 'Gray 2014' next year. This is not the season when people want to hear from politicians. Now is the time for family, friends and celebration."

Ashley Killough (‏@KilloughCNN)
Boehner rejects 'do nothing' label for the House, says 'we've done our work' this year http://cnn.it/19f2axP via @deirdrewalshcnn

Sam Stein ‏(@samsteinhp)
A side effect of a terribly unproductive Congress, @aterkel finds, is less money spent on lobbying http://huff.to/1gCyOij

Ryan Sloane ‏(@RyanSloaneCNN)
US House of Representatives passes 10yr extension on law banning manufacture of plastic guns that are undetectable by screening devices.

James Pindell (WMUR) ‏(@JamesPindell)
SIREN: I am told @SenScottBrown will be the keynote speaker at the @NHGOP Holiday Reception 12/19 #nhsen #nhpolitics

Jennifer Granholm (‏@JenGranholm)
'Tis the season to be #unselfie. We may be divided in politics, but acts of kindness remind us that we are one human family. #givingtuesday

Caroline Kennedy’s pony, Macaroni, was given to her as a gift by Vice President Lyndon B. Johnson. Macaroni became an iconic figure within the White House, receiving thousands of fan letters from the American public, according to the Presidential Pet Museum.

Macaroni wasn’t the only pet Caroline received as a gift from a prominent politician. Nikita Khrushchev, leader of the Soviet Union during the Cold War, gave Caroline a puppy named Pushinka.

Kennedy is now in the news as the U.S. ambassador to Japan. She met with Vice President Joe Biden yesterday when he visited Japanese Prime Minister, Shinzo Abe, in Tokyo.