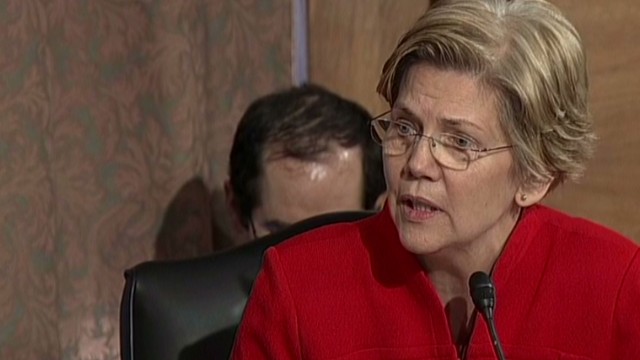 BREAKING …. ELIZABETH WARREN RULES OUT WHITE HOUSE BID IN 2016: The Boston Herald reports: “U.S. Sen. Elizabeth Warren pledged today she will not run for president in 2016 and will finish her term.” The Bay State senior senator has been mentioned in the preliminary talk about the presidential race, but Hillary Clinton has generated the most buzz.
"I'm not running for president and I plan to serve out my term," she said at a press conference in Boston with Mayor-elect Marty Walsh.
When further pressed, she added: "I pledge to serve out my term.
"I am not running for president. I am working as hard as I can to be the best possible senator I can be."

OBAMA WANTS TO RAISE MINIMUM WAGE: Making sure that the U.S. economy works for every working American is "the defining challenge of our time," Obama said in a speech at the Center for American Progress, a liberal think tank. “It’s well past the time to raise a minimum wage that in real terms right now is below where it was when Harry Truman was in office,” he said. – Brianna Keilar and Kevin Liptak

CNN POLL: SUPPORT FOR STRICTER GUN CONTROL FADES
According to a new CNN/ORC International survey, 49% of Americans say they support stricter gun control laws, with 50% opposed. The 49% support is down six percentage points from the 55% who said they backed stricter gun control in CNN polling from January, just a few weeks after the tragedy at Sandy Hook Elementary School.

THE BUZZ: CHENEY 'SURPRISED' BY PUBLIC SPAT BETWEEN DAUGHTERS: "We were surprised that there was an attack launched against Liz on Facebook, and wished it hadn't happened. It's always been dealt with within the context of the family and frankly that's our preference."

TRAIL TRIVIA
(Answer below)
Which Senator told Bill Maher, "You don't have to pass an IQ test to be in the Senate”?

Leading Las Vegas Sun: Reid confident Congress to pass immigration bill, says Boehner will ‘cave in’
Senate Majority Leader Harry Reid predicted Tuesday that Congress will pass an overhaul of the nation’s immigration system sometime next year.“I feel positive we will get an immigration bill passed,” the Nevada Democrat said in an interview with the Sun’s editorial board Tuesday.

Leading Drudge: Dirty Harry Exempts Staff From Obamacare
Democratic Senate Majority Leader Harry Reid, one of Obamacare's architects and staunchest supporters, is also the only top congressional leader to exempt some of his staff from having to buy insurance through the law's new exchanges. – CNN’s Chris Frates (@Frates)

And Sen. Ted Cruz (R-Texas) pounces in a release: “Sen. Reid's decision to exempt his staff from Obamacare exchanges is the clearest example yet of Obamacare's failures and Washington hypocrisy. His staff worked to pass it and continue to promote it, now they don't want to be part of it because it's a disaster.”

- Obama quotes Pope Francis -
IN A SPEECH AT THE CENTER FOR AMERICAN PROGRESS: “Some of you may have seen just last week the Pope himself spoke about this at eloquent length. ‘How can it be,’ he wrote, ‘that it's not a news item when an elderly homeless person dies of exposure but it is news when the stock market loses 2 points.’ But this increasing inequality is most pronounced in our country. And it challenges the very essence of who we are as a people.”

- Catholics praise Obama for quoting the Pope -
CATHOLICS IN ALLIANCE FOR THE COMMON GOOD RELEASED IN A STATEMENT: "It is clear that the President is taking Pope Francis's message to heart ... We were glad that the President quoted Francis's words on inequality, and as Catholics in the United States we make them our own."

- Iran Hearing Heats Up: ‘Jihad has finger on nuclear button’ -
REP. TRENT FRANKS, R-ARIZONA, AT A HOUSE ALL MEMBER BRIEFING: “This will be the first time that jihad will ultimately have their finger on the nuclear button. Now, will that happen immediately? I am not suggesting that it will but unfortunately the present protocol has put it in reach for them to eventually reach that capability.”

- You know the tides have turned for women when... -
SEN. AMY KLOBUCHAR AT POLITICO'S WOMEN RULES EVENT IN WASHINGTON: “For a while we (female Senators) were 16 and that was unfortunate because they’d call us the “Sweet 16” And as I pointed out in a tweet, we made United States history when there was finally a traffic jam in the United States Senate Woman’s bathroom.”

- Vitter eyeing Louisiana Governor race -
SEN. DAVE VITTER IN AN EMAIL TO SUPPORTERS: “Many good friends and supporters have encouraged me to run for Governor in 2015–to bring my focus and leadership to the challenges we face as a state. We started to consider this as a family over Thanksgiving. We certainly haven't made our decision yet, so we'll be reflecting and praying on it very carefully through the Christmas holidays.”

Senator Mark Pryor, R-Arkansas, told Bill Maher in his 2008 Documentary, ‘Religious,’ "You don't have to pass an IQ test to be in the Senate.” Pryor made this statement in response to Maher’ saying, “It worries me that people are running my country who believe in a talking snake.”