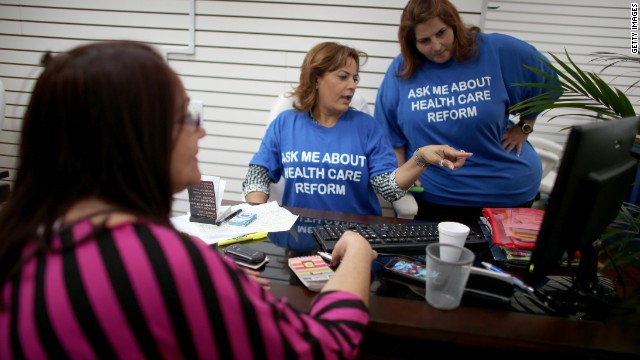 (CNN) - More than one in four Americans who lack health insurance say they're more likely to pay a government fine for not having coverage rather than sign up for insurance, according to a new national poll.

A Gallup survey indicates that 63% of Americans who currently don't have coverage say they'll sign up, as required by the Affordable Care Act. But 28% say they're more likely to pay the fine mandated by Obamacare. That 28% figure is little changed over the last month, as the clock ticks towards the March 31, 2014, deadline for having health insurance.

The results of the survey are based on Gallup Daily tracking the past couple of weeks of uninsured Americans' understanding of the federal health care law's requirements, and whether they plan to get coverage.

CNN Money: No thanks, Obamacare. I'll pay the penalty

Approximately 48 million Americans currently don't have health insurance. Under the federal law, which was passed in 2010, people without coverage will start facing fines in 2014. The amount of the fee will increase over the new few years.

According to Gallup numbers dating back to September, there's little generational divide among uninsured Americans over whether they plan to sign up for coverage, but there is a partisan gap.

"The biggest differences appear by party identification - 45% of uninsured Republicans plan to pay the fine, compared with 31% of independents and 15% of Democrats," says a release by Gallup.

The Gallup poll was conducted Nov. 20-Dec. 2 of 655 adults nationwide who say they currently don't have health insurance. The survey's sampling error is plus or minus five percentage points.