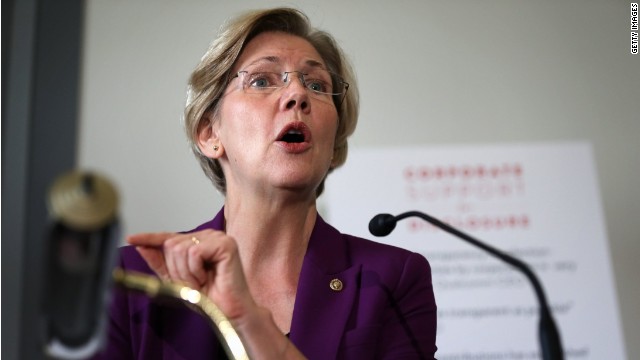 Warren: 'I'm not running for president'

(CNN) - Sen. Elizabeth Warren says she's "not running for president" in 2016 and the Massachusetts Democrat is pledging to "serve out" her term, which goes through 2018.

The freshman Senator, who's a darling of many progressives, made her comments Wednesday at a news conference for Boston Mayor-elect Marty Walsh.

"I'm not running for president and I plan to serve out my term," Warren said.

Pressed further by reporters, Warren added that she would "pledge to serve out my term."

Warren's comments were first reported by Boston media. A spokesman for the Senator confirmed her remarks to CNN.

Warren, a former Harvard University Law School professor and special assistant to President Barack Obama who took the lead in creating the U.S. Consumer Financial Protection Bureau, defeated Republican Sen. Scott Brown in last year's election. Some on the left have promoted Warren as a 2016 liberal alternative to former Secretary of State Hillary Clinton, who's seriously considering another run for the White House.

According to CNN/ORC International poll conducted two weeks ago, 63% of Democrats and independents who lean towards the Democratic Party said they would likely support Clinton as their party's presidential nominee, with 12% backing Vice President Joe Biden and 7% supporting Warren.

Warren's words are doubtful to end speculation that she might eventually run for president. Then-Sen. Barack Obama, who was elected in 2004, originally said he planned to serve out his six-year term in office. But Obama changed his mind and successfully ran for president in 2008.