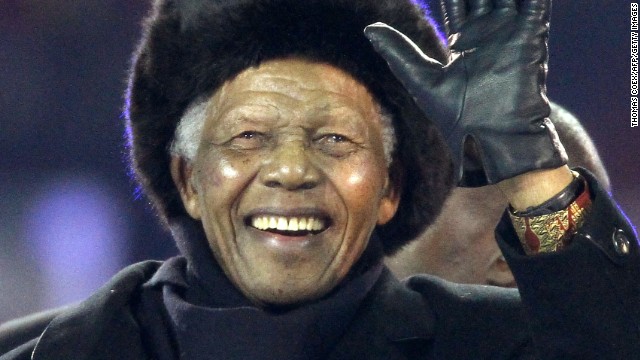 BREAKING: NELSON MANDELA DIES … The revered statesman who emerged from prison after 27 years to lead South Africa out of its dark days of apartheid, has died. He was 95.

Mandela battled health issues in recent years, including a recurring lung infection that led to numerous hospitalizations. In a nation healing from the scars of apartheid, Mandela became the moral compass.

His defiance of white-minority rule and his incarceration for fighting against segregation focused the world's attention on South Africa's apartheid system, making him a symbol of the struggle for racial equality. In his lifetime, he was a man of complexities. He went from being considered a terrorist, to an imprisoned freedom fighter, to a unifying figure, to an elder statesman respected worldwide.

SOUTH AFRICAN PRESIDENT JACOB ZUMA: “Our nation has lost his greatest son. Our people have lost a father. Although we knew that this day would come, nothing can diminish our sense of a profound and enduring loss. His tireless struggle for freedom earned him the respect of the world. His humility, his compassion and his humanity earned him their love. Our thoughts and prayers are with the Mandela family. To them we owe a debt of gratitude. They have sacrificed much and endured much so that our people could be free.”

PRESIDENT BARACK OBAMA: “I am one of the countless millions who drew inspiration from Nelson Mandela’s life. My very first political action, the first thing I ever did that involved an issue or policy or politics, was a protest against apartheid. I would study his words and his writings. The day he was released from prison gave me a sense of what human beings can do when their guided by their hopes and not by their fears. And like so many around the globe, I could not fully imagine my own life without the example that Nelson Mandela set. So long as I live I will do what I can to learn from him.”

BATTLE FOR WOMEN: BOEHNER ACKNOWLEDGES ‘WE’VE GOT TO BE MORE SENSITIVE’ TO WOMEN …“Well, I’m trying to get them (Republican Members) to be a little more sensitive,” Speaker John Boehner said at his weekly news conference. “You know, you look around the Congress, and there are a lot more females in the Democratic caucus than there are in the Republican caucus, and you know some of our members just aren't as sensitive as they ought to be.”

AS PELOSI SEIZES ON THE NEWS …“They've made an art of running against women in ways that we think are inappropriate,” House Minority Leader Nancy Pelosi said at her weekly news conference. “Nonetheless it would be interesting to see what they have in their curriculum.”

TRAIL TRIVIA
(Answer below)
Which state is the birthplace of the greatest number of U.S. Presidents?

Leading CNNPolitics: No deal yet, but sides said to be closer to budget agreement
A senior Democratic aide told CNN that House Budget Committee Chairman Paul Ryan and Senate Budget Committee Chairwoman Patty Murray met Wednesday afternoon and are narrowing down the issues in a potential spending deal. – Lisa Desjardins

Leading Politico: GOP men tutored in running against women
The National Republican Congressional Committee wants to make sure there are no Todd Akin-style gaffes next year, so it’s meeting with top aides of sitting Republicans to teach them what to say — or not to say — on the trail, especially when their boss is running against a woman. – John Bresnahan and Anna Palmer

Leading Oakland Tribune: California Gov. Jerry Brown leads in a landslide, Field Poll finds
f Jerry Brown runs for an unprecedented fourth term as governor of the Golden State, he would trounce all three likely Republican challengers in June's open primary, according to a new Field Poll … Roughly 80 percent of voters are unfamiliar with Donnelly or Kashkari, who has never run for elected office before … Voter support for Kashkari is the lowest among the three potential Republican contenders.

- Sen. Chuck Schumer weighs in on Mayor-elect Bill de Blasio’s pick to lead the NYP -
“I worked with Bill Bratton in the early 1990s and he helped transform New York from a crime ridden city to a safe city. The Mayor-elect made a great choice. I am confident he will continue the great success the NYPD has enjoyed.”

- K.Y. Gov.: McConnell's Obamacare criticism will hurt him -
KENTUCKY GOV. STEVE BESHEAR AT THE HOUSE DEMOCRATIC CAUCUS MEETING ON OBAMACARE: “I think (Obamacare) will be an issue in next November's Senate race in Kentucky, as well as races all over the country … I predict that it will be an issue where people are going to start looking at the critics and saying, 'What was all that yelling and screaming about? I think you must have misinformed us about the Affordable Care Act.’”

- Dana Bash takes you inside the REAL Alpha House -
SEN. CHARLES SCHUMER, D-NEW YORK: “I had a dream, literally two nights ago that the rats were back.”
REP. GEORGE MILLER, D-CALIFORNIA, RESPONDS:"I thought the rats were in the Senate. I didn't know they came to the House."

- Administration responds to U.S. teacher shot, killed in Benghazi –
JAY CARNEY AT THE WHITE HOUSE BRIEFING: “I can confirm that a US citizen was shot and killed in Benghazi, Libya. We offer our condolences to the victim's family. The State Department is in contact with the family and is providing consular assistance. We are following events closely and at this point no individual or group has claimed responsibility. We look to the Libyan government to thoroughly investigate this killing. Out of respect for the privacy of the family, we have no further comment at this time.”

Jim DeMint (‏@JimDeMint)
Some of the surprises buried in the "farm" bill include underwear, cow flatulence, and goat manure: http://herit.ag/1bjyWBh

Amanda Terkel (‏@aterkel)
82 U.S. House members and 11 U.S. senators are ALEC alumni, according to list in the group's program at their policy conference.

Virginia is the birthplace of the most U.S. presidents, with eight commander-in-chiefs hailing from the Commonwealth.

Coming in a close second, is Ohio where seven presidents were born. There hasn’t been a president from either state since William Harding of Ohio was president in 1923.

Since we changed our question late this afternoon, there are no winners of today’s Trail Trivia.