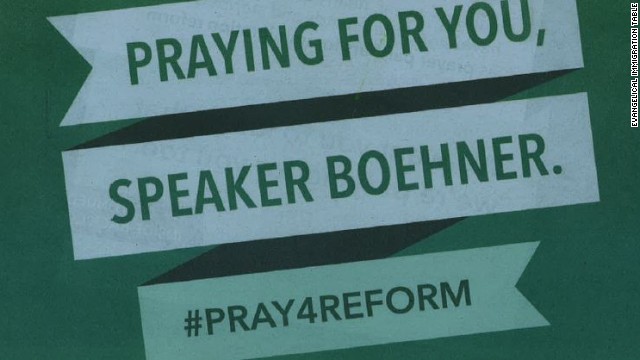 Washington (CNN) – A group of evangelicals in favor of passing immigration reform have a message for House Speaker John Boehner: "We're praying for you."

The group says the ad will air on WTOP, a radio station in Washington, D.C., as well as 30 Christian radio stations in Texas and North Carolina. A Spanish-speaking iteration of the spot will also air in Southern California.

"Our immigration system is broken and it is hurting everyone," says Dub Karriker, senior pastor at the Christian Assembly Church in Durham, N.C. "Families are separated, employers can't find the workers they need, and the undocumented who want to get right with the law are told to get in a line that doesn't exist."

The ads all feature local pastors from the areas where they are running.

In print, the ad appeared in the Express newspaper in Washington, D.C on Thursday.

CNN emailed a spokesman for Boehner's office about the ad but did not receive a response by the time this article was published.

On a Thursday call with reporters, Leith Anderson, president of the National Association of Evangelicals and a leading member of Evangelical Immigration Table, said North Carolina, Texas and California were selected because "they are significant places in terms of the Congress."

The group, which formed earlier this year, has brought together leaders from the sometimes fractured world of evangelical Christian politics with the express goal of passing immigration reform. Groups involved include the Southern Baptist Ethics and Religious Liberty Commission, the National Association of Evangelicals, Sojourners and Focus on the Family.

This is not the first ad campaign the group has launched. On top of events across the country, according to the group's figures, Evangelical Immigration Table has spent over $1 million on paid media efforts.

Their work, however, has not led to legislative success.

Although President Barack Obama made immigration reform one of his second term priorities and the Senate in June passed immigration reform–with some Republican support–the House of Representatives has done very little to move on the issue.

Last month, Boehner insisted that while immigration reform was "absolutely not" dead, he had "no intention" of negotiating with the Democratic-led Senate over its comprehensive immigration proposal.

Many Republicans in Congress who oppose the Senate plan–which includes an eventual pathway to citizenship for undocumented immigrants currently living in the United States–have said they want to deal with immigration reform through a number of smaller bills, not one larger piece of legislation. Some House Democrats have said they won't agree to that approach.

Since the law failed to move in the House, groups urging the passage of immigration reform have made Boehner the focus of their frustration on the bill's lack of momentum. Evangelical Immigration Table brought evangelicals to Washington to urge passage of the law earlier this year and for most of 2013, Boehner's Capitol Hill office has been the site of immigration protests.