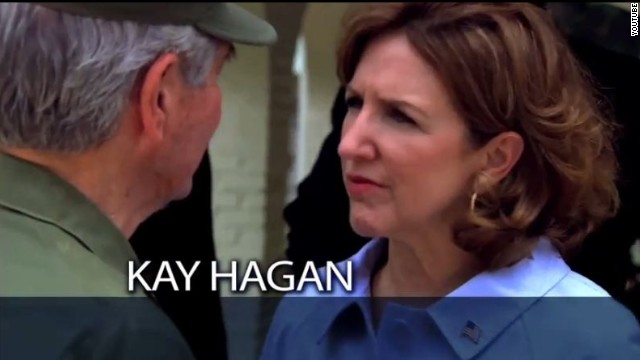 (CNN) - A group supporting Democratic senators and Senate candidates says it's going up with a new television commercial defending Sen. Kay Hagan of North Carolina, who's considered vulnerable as she runs for re-election next year.

The theme of the Senate Majority PAC's 30-second spot is that Hagan is fighting to make health care more affordable and accessible to North Carolina voters.

"She protects my Medicare and Social Security; she took on drug companies to lower the cost of prescriptions for seniors; voted to cut waste and fraud in Medicare; force insurance companies to cover cancer and other pre-existing conditions," say four different voters who speak in support of Hagan in the ad.

Senate Majority PAC says it's spending around $750,000 to run the spot for two weeks across the state. It's the second commercial the PAC has run in support of Hagan, who won 53% of the vote in her 2008 election to the Senate.

The voters in the spot then criticize North Carolina Speaker Tom Tillis, who many consider the leading Republican challenger to Hagan in next year's midterm elections, for allegedly siding with insurance companies and letting them deny people coverage.

"It's evident that Kay Hagan and her liberal allies have seen her campaign completely implode because of her unwavering support for Obamacare, and now they are desperately trying to do damage control to save her Senate seat," said North Carolina Republican Party spokesman Daniel Keylin, in responding to the ad.

"No amount of political spin and sugar-coating over the airwaves will change the fact that Kay Hagan repeatedly misled the public to justify casting the deciding vote for this train wreck. North Carolinians know that Kay Hagan owns Obamacare," Keylin added.

Hagan has been targeted over her support of the health care law in ads from the National Republican Senatorial Committee and from pro-GOP outside groups. Americans for Prosperity has spent big bucks to run ads against the Senator.

While she has been a supporter of Obamacare, she was also part of a small group of Senate Democrats who wanted to hold President Barack Obama accountable on his proposal to extend health insurance plans that got canceled because of Obamacare regulations.

The President won the state in his 2008 victory for the White House, but 2012 GOP challenger Mitt Romney carried the state in last year's presidential election. Republicans currently control the governor's office and both houses of the North Carolina state legislature.