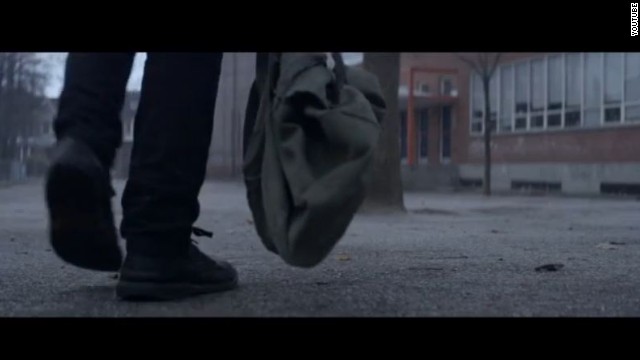 Released online Wednesday, the spot is set to air on cable news networks this week.

The ad, titled "No More Silence," shows a roomful of young children standing for a moment of silence to mark the Newtown anniversary. It also features scenes of other members of a community bowing their heads to mark the moment.

"On December 14th, we'll have a moment of silence for Newtown," the ad's narrator says.

A ticking clock can be heard throughout the ad, building up suspense. Then halfway through the spot, a presumed shooter can be seen carrying a large duffel bag as he or she walk towards what looks like a school.

"But with 26 more school shootings since that day," the narrator continues, "Ask yourself: Is silence what America needs right now?"

The ad then dramatically shifts in between shots of the person with the bag outside of the school and the roomful of children. Near the end of the spot, the person pulls something out of the bag and enters the building.

The commercial abruptly stops with the clock coming to a final tick and a dark screen that simply reads: "Speak out now."

Moms Demand Action for Gun Sense formed one day after last year's Sandy Hook Elementary School shooting, which left 20 children and six adults killed. The group has been active in the fight for tougher gun laws in Washington. They plan to hold a "week of action" in the days leading up to the anniversary, calling on lawmakers to adopt reforms, including the comprehensive background checks measure that failed earlier this year in the Senate.

"The ad is a commentary on the need for continued indignation among Americans at the inaction of Congress," reads a news release from the group.

Also Wednesday, authorities released the Newtown 911 calls to news organizations, sparking intense reaction from the families and the community, and bringing renewed debate over media attention focused on the school shooting as the first anniversary nears.