(CNN) - President Barack Obama and his family lit the National Christmas Tree on Friday, continuing a 91-year tradition in Washington. In his remarks at the ceremony, the President also paid tribute to Nelson Mandela.

"This year we give a special measure of gratitude for Nelson Mandela and man who championed that generosity of spirit," Obama said of the iconic former president of South Africa, who passed away Thursday at the age of 95.

"In his life, he blessed us with tremendous grace and unbelievable courage, and we are all privileged to live in a world touched by his goodness."

The President wished onlookers a Merry Christmas and holiday season on behalf of the first family, including dogs Bo and Sunny.

"We are our brother's keeper. We are our sister's keeper. So on this season of generosity let's reach out to those who need help the most,” he said. “Let's make sure that in this season of reflection our incredibly brave service members and their families know how much we appreciate their sacrifice.”

"In this season of hope, let us come together as one people, one family to ensure that we are doing everything we can to keep America the land of endless opportunity and boundless optimism for which we are so thankful."

The lighting ceremony took place on the Ellipse in President's Park. Obama was introduced by Secretary of the Interior Sally Jewell.

Mariah Carey took the stage to cheers shortly after the President. The performance lineup also included Aretha Franklin and the band Train.

On Thursday, Obama, joined by first lady Michelle Obama, marked the end of Hanukkah with two receptions at the White House. 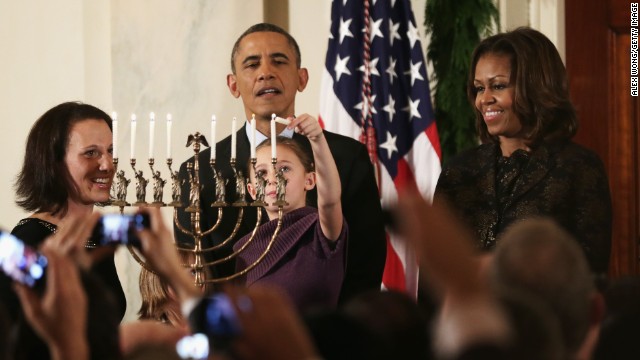