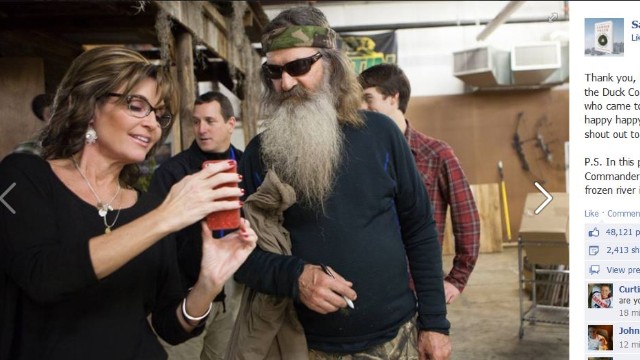 (CNN) - Sarah Palin met some of the stars of the popular television series, "Duck Dynasty," over the weekend while on her book tour in Monroe, Louisiana.

"Had a blast meeting the Duck Commander gang as well as the great folks who came to the book signing yesterday evening," the former Alaska governor and 2008 GOP vice presidential nominee wrote Sunday on Facebook.

The Robertson family rose to fame after creating the successful company Duck Commander, which makes duck calls for hunters. The Louisiana-based family later became the subject of the A&E series.

The Lead: Why fans flock to 'Duck Dynasty'

Photos posted on her page also show that Palin's husband, Todd, joined the gathering via FaceTime, a videophone app for Apple products. In one photo, Palin can be seen showing her iPhone to Phil Robertson, the patriarch of the Duck Commander clan.

"In this photo, Todd was FaceTiming with the Duck Commander team while he was out snowmaching on a frozen river in Alaska training for the Iron Dog!" Palin wrote.

It's not the first time Palin has met a member of the family; she took a photo with Willie Robertson, the CEO of the family business and main star of the A&E series, at this year's National Rifle Association convention. She praised the family for promoting conservative values, specifically Phil Robertson's view against abortion.

"To our GOP leaders in Washington, especially - this is what Americans desire and deserve; we're not rooting for your social truces," she wrote. "Kudos to these Duck dudes for speaking their minds, and for their boldness in living the American dream of LIFE, liberty, and the pursuit of happiness - reminding us all that it's only with freedom that anything is possible."