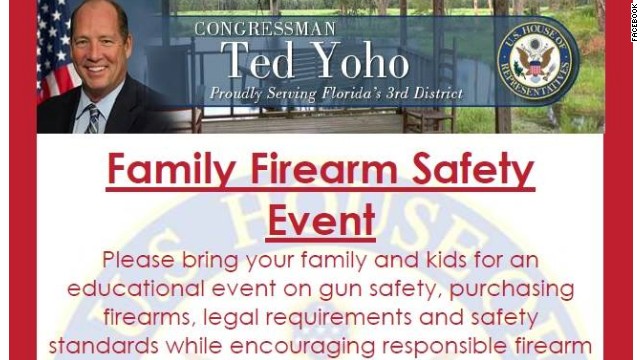 "My thoughts and prayers go to the victims and families," the Florida Republican Congressman added, in a statement posted Monday to his Facebook page.

"Gun safety education and responsible gun ownership are important topics that should be taught throughout the year," Yoho continued. "And this event is an opportunity to help my constituents learn about these incredibly important practices."

The first-term Congressman will host the event, titled "Family Firearm Safety Event," in his district on Saturday.

Yoho is a staunch opponent of gun control. After President Barack Obama unveiled his proposals and executive actions in January to combat gun violence, Yoho released a statement saying the President's remarks made him "convinced more than ever that we must protect our 2nd Amendment rights."

"While I agree with President Obama's message that we must curb gun violence and protect our citizens, disregarding our Constitutional rights are the wrong way to go," he added, encouraging the Obama administration to "enforce the laws already on the books."

"As a proud gun owner, I believe that our right to bear arms is a birthright and I will oppose any effort to infringe on our guaranteed Constitutional rights," Yoho continued.