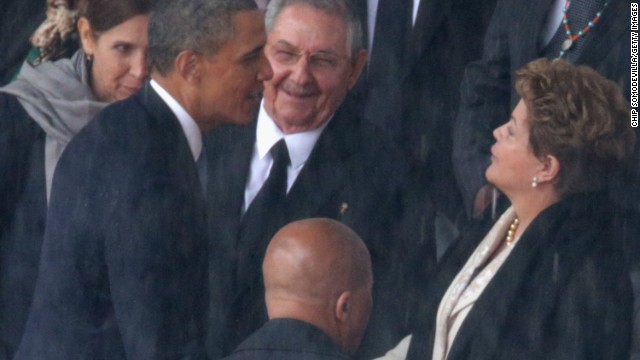 (CNN) - While much was made about President Barack Obama's handshake with Cuban President Raul Castro at Nelson Mandela's memorial service, the U.S. leader also gave a warm greeting to Brazilian President Dilma Rousseff, despite recent tension between the two countries.

As Obama took his place among other world leaders and dignitaries before he addressed the memorial, he shook hands, embraced and patted them on the shoulder. When Obama arrived at Rousseff, he kissed her on both cheeks

The U.S. and Brazil jointly agreed in September to postpone Rousseff's state visit to Washington - originally scheduled for October - over controversy over reports the U.S. government was spying on her communications.

A White House statement announcing the postponement said that Obama had previously ordered a thorough review of American intelligence activities, but it acknowledged that process would take several months to complete.