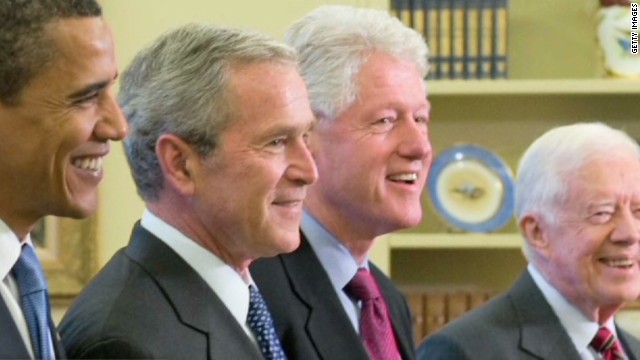 Former president George W. and Laura Bush accompanied President and Mrs. Obama on Air Force One for the 16 hour journey to Johannesburg. Also on board was a potential future president, former Secretary of State Hillary Clinton.

Before a refueling stop in Senegal, administration officials revealed President Obama would deliver a 10-15 minute speech at Tuesday’s memorial service.

“He’ll reflect on what Nelson Mandela meant to the people of South Africa, to him personally as well,” Deputy National Security Advisor Ben Rhodes told reporters

But because of the massive security “footprint” of a traveling U.S. president overseas, Obama will not be able to attend funeral services for Mandela in Qunu this weekend.

“We want to be respectful of what will be a very profound laying to rest of Nelson Mandela. So this certainly was the right event for the President to attend, to speak at, and to pay his respects to Nelson Mandela,” Rhodes said.

As for Secretary Clinton, the prospective 2016 presidential candidate is expected to rendezvous with her husband, former president Bill Clinton and their daughter Chelsea who are set to arrive in South Africa via South America, following an event sponsored by the Clinton Global Initiative in Brazil.

Former president Jimmy Carter is scheduled to arrive with The Elders, a group of retired statesmen founded by Mandela and others.

The only former president not planning to attend, George H.W. Bush no longer travels long distances due to his age, a spokesman said.

The overseas journey, hastily arranged in less than three days following Mandela’s death, is a major logistical challenge for the Obama administration, a feat that will only be surpassed by the week’s monumental series of memorial events orchestrated by the South African government.

A total of 91 heads of state, complete with their own delegations are expected to file into FNB Stadium in Johannesburg along with tens of thousands of mourners for what will undoubtedly be a global event of both mourning and celebration. After the president landed, the motorcade made its way through rush hour traffic. One driver stuck next to the motorcade tweeted, “My dad was stuck in traffic with Obama this morning” along with a picture of the presidential limo. Also, during the motorcade from the airport to the hotel, a car tried to cut into the long line of the president’s motorcade. The Secret Service agent in the press van spotted car and told a local police officer to pull the woman over. “You don’t do that! You’ll be killed!” the South African officer shouted at the woman. Pool reports said that she didn't look happy.

On the flight to South Africa, Obama spent part of the trip drafting his remarks for the Mandela memorial service. The president had not been working on the speech prior to the South African leader’s death said.

“In terms of this particular set of remarks, we waited until we had an indication from the South African government that he may speak, and then he has been working on it over the weekend,” Rhodes said.

Any trip to Africa is personal for Obama, given his unique biography among American presidents. However it is not only the continent of his late Kenyan father. It also belongs to Mandela, a father figure of sorts to modern South Africa and a man who also inspired a young Obama’s political awakening.

President Obama has repeatedly praised Mandela as one of his heroes. “He no longer belongs to us. He belongs to the ages,” Obama said during a brief statement to reporters Thursday in the hours following Mandela’s death.

The president has frequently cited the South African leader as a source of political inspiration, beginning when he attended an anti-apartheid rally as a college student, an event Obama has described as his first political act.

“One of the points the President will make is that it took decades of persistence and talent and a wide range of very unique skills to make Nelson Mandela the figure that he was and make him capable of bringing about that change,” Rhodes added.

The two men met face-to-face only once in 2005, when Obama was a U.S. Senator. President Obama then attempted to reunite with Mandela last year during a trip to Africa. But by then Mandela was too sick to see the U.S. president.

Administration officials said Obama would attempt to meet with some of Mandela’s surviving family members while on the ground in South Africa.

“We’ve been in touch with the Mandela family and are seeking to see if there is time for them to meet. Unfortunately, we don’t know for certain because things are so fluid on the ground,” Rhodes said.

“But we would certainly like the opportunity for the President to pay his respects to (Mandela’s widow) Graça Machel and the broader Mandela family,” Rhodes added. Obama phoned Mandela’s widow to offer his condolences last week.

Vice President Joe Biden, who just wrapped a foreign trip to Asia that ended with North Korea’s release of an American veteran, is not expected to trip to South Africa.

As for former Secretary Clinton, her presence at the memorial service, combined with her husband’s past close relationship with Mandela, are certain to garner attention, further stoking Washington horse-race chatter about her possible 2016 candidacy for the White House. Upon her arrival in South Africa, she was joined by Huma Abedin, her long-time political aide.

But the former Secretary of State is not the only potential 2016 contender to make the trip to South Africa. Republican Senator Ted Cruz is scheduled to join with members of a U.S. Congressional delegation in its journey.

Far removed from the political scene, former president Bush spent nearly 90 minutes in the section of Air Force Once reserved for traveling journalists. Still, in an indication even former presidents cannot be too careful, the discussion was kept off-the-record, a White House press pool report stated.

The South Africa trip provided a rare opportunity for the trio of First Couples, minus Bill Clinton, to engage in private conversations, which they eagerly did in a conference room aboard Air Force One, officials said.