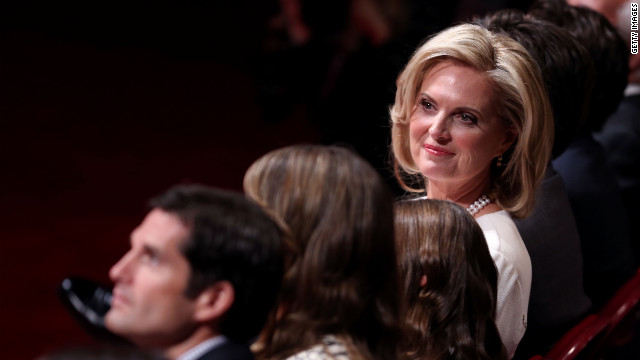 Ann Romney: 'It's too bad the election isn't today'

(CNN) - The wife of former Republican presidential nominee Mitt Romney said she and her husband have moved on from last year's election.

"We don't look back," Ann Romney said in an interview with CNN's Wolf Blitzer airing on the "Situation Room" Wednesday. "Neither one of us ever look back."

But with President Barack Obama failing to grab the approval numbers today as he did last November, she said it's a shame voters are picking their commander-in-chief this year.

In a hypothetical Washington Post/ABC News poll, conducted last month, which asked respondents who they would vote for if the 2012 presidential election was held today - Mitt Romney led Obama, 49% to 45%.

"Well, it's too bad the election isn't today," Ann Romney said of the poll results. "It's frustrating a bit to watch what's happening with the Obamacare rollout but we are where we are."

Ann Romney also paid tribute to Nelson Mandela - saying that the former South Africa leader was a "power example" in both her and her husband's life.

"You know, I think there's maybe not a person living that has had a bigger impact, not just on Africans lives but on everybody's life," Ann Romney said in an interview with Wolf Blitzer, airing on the "Situation Room" Wednesday.

Tens of thousands, including President Barack Obama, former U.S. presidents, and dignitaries from around the globe, gathered Tuesday to bid farewell to the anti-apartheid icon in Johannesburg.

Ann Romney said Mandela was a leader held the highest esteem throughout the world.

"He was a powerful example in my life; a power example in my husband's life of how you move something that is so significant with such a peaceful, loving, generous, wonderful essence of who he is," she said, adding that Mandela was an "extraordinary human being."

Ann Romney also said members of Congress should show more respect to one another in light of GOP congressional leadership concerns over lawmakers' sensitivity towards women.

Following comments from House Speaker John Boehner last week that some members of his caucus "aren't as sensitive as they ought to be," Ann Romney said that in Congress "...there's more to it than just being more sensitive."

"Let's remember that the American people sent us there and they we need to be respectful of the needs of the American people let's get things done. Let's work across the aisle because there's nothing now - I mean, it's just extraordinary what's going on in Washington."

"We have some extraordinary women that are representing New Hampshire, South Carolina, New Mexico that are doing great jobs," she added.

"I think it was a bit cathartic," she said when asked what prompted her to write the book, from which proceeds will go to neurological research.

"It's about as far away from politics as you can get and it's about love, family traditions."