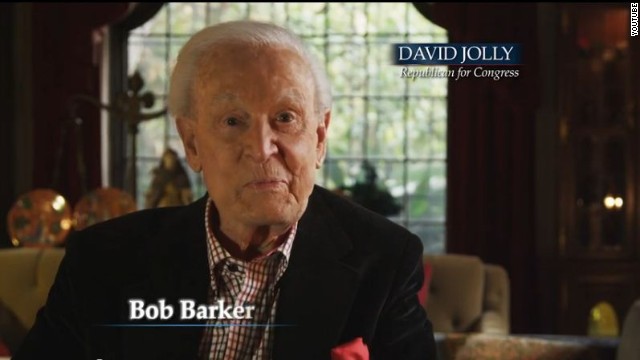 In the ad, Barker, who turns 90 Thursday, says "folks, when you get to be as young as I am, you call it like you see it. That's why I'm supporting David Jolly for Congress. I admired David as he worked along my good friend Bill Young, helping wounded veterans, protecting our seniors and children, and by standing up for Pinellas (county) with character and honor."

The spot ends with Barker saying "with Jolly, the choice is right."

Jolly's campaign says the commercial would first run Thursday morning, during the local airing of "The Price is Right." Barker is making a cameo appearance Thursday's program to celebrate his 90th birthday.

Jolly, who worked as a lobbyist, was also a longtime adviser and former general counsel for Young, who was in his 22nd term in the House and was the longest serving Republican in the chamber at the time of his death.

Jolly is facing off against state Sen. Kathleen Peters in the January 14 primary. The winner will run against Democrat Alex Sink, the former chief financial officer for Florida, in the March 11th general election.

Florida's 13th district, which covers most of Pinellas County and parts of St. Petersburg, is considered a swing district and the special election to fill out the remainder of Young's term is expected to be firmly in the national political spotlight.