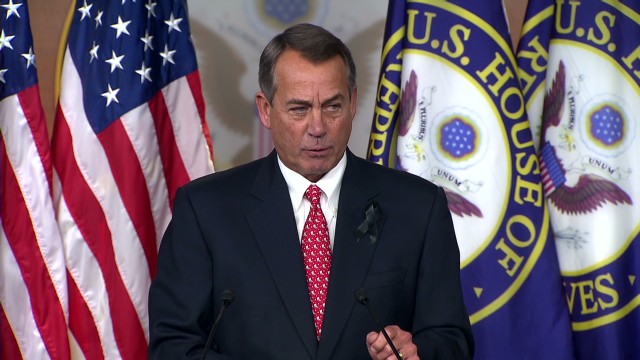 PELOSI CONFIDENT DEMOCRATS WILL PASS BUDGET DEAL … THE HOUSE MINORITY LEADER IN AN INTERVIEW WITH CNN’S JAKE TAPPER: ”They (Democrats) won’t let it go down … I said to the people, ‘You know, you’ll have to come to your own decision but on the merits of itself the budget bill is a vote that I will make and I think that it should pass.’ … We still don’t know how many votes the Republicans have, but nonetheless whatever it is, they haven’t passed anything with their own votes that was any good for the country.”

HOUSE BUDGET VOTE ILLUMINATES GOP SPLIT … Ever present but rarely so public, the rift between conservative and moderate Republicans over policy and tactics was on full display Thursday ahead of a House vote on the compromise federal budget worked out with Democrats. – Deirdre Walsh. Dana Bash and Tom Cohen

BOEHNER CONDEMNS CONSERVATIVE ACTIVIST GROUPS AT A PRESS CONFERENCE: “Why conservatives would criticize this is beyond any recognition I could come up with ... This budget agreement takes giant steps in right direction. It’s not everything I wanted, but when groups come out and criticize a deal they’ve never seen, you begin to wonder just how credible those actions are.”

Michael Needham (‏@MikeNeedham)
Would welcome a fact-based discussion with @SpeakerBoehner over what he disagrees with in our statement. http://heritageaction.com/press-releases/heritage-action-emerging-ryan-murray-budget-deal/

THE BUZZ: NOTHING UNDER THE TREE FROM OBAMA THIS YEAR … VICE PRESIDENT BIDEN IN AN INTERVIEW WITH TMZ: “We exchange birthday gifts. We don't exchange Christmas gifts … It’s hard (to pick out gifts) but since we both love golf we usually give each other something to do with golf."

TRAIL TRIVIA
(Answer below)
Who were the only father and son to serve simultaneously in the Senate?

Leading CNNPolitics: Senate pulls an all-nighter, approves federal appeals court nominee
When asked if this time Rouse was really leaving, a Senior Administration Official said coyly, "He's said many times that he is leaving. This time, people seem to believe him." Rouse has been one of President Barack Obama's closest and longest serving aides, in the key advisory role of Counselor to the President.– Brianna Keilar and Matthew Hoye

Leading Kentucky Courier-Journal: Sen. Mitch McConnell mum on budget deal that is dividing the GOP
Some tea-party GOP House members and senators, including Kentucky Rep. Thomas Massie, R-4th District, and Sen. Rand Paul, have denounced the agreement as a betrayal of conservative principles. McConnell is facing a GOP primary challenge from Louisville businessman Matt Bevin. On Wednesday, Bevin criticized McConnell for not saying whether he opposes the deal.– James Carroll

Matt Bevin (‏@MattBevin)
#WheresMitch It's been 43:39:20 since ‘Ryan-Murray’ budget was announced, still no word from McConnell. pic.twitter.com/qAz2oioVvB

Leading Drudge: Hollywierd!
12 Years a Slave and American Hustle both earned seven nominations each, leading the motion picture categories. In television, House of Cards and Behind the Candelabra both scored four mentions. – Michael O’Connell

Leading Politico: Senate bill has new Iran sanctions
The Senate Banking Committee’s leaders have drafted a bill that would slap fresh sanctions on Iran and will pass the legislation if Tehran fails to follow through on its end of a temporary nuclear deal with global powers. – Burgess Everett

Leading The New York Times: Senators at Loggerheads Over New Confirmation Rules
An all-out procedural war has broken out in the Senate: Harry Reid of Nevada, the majority leader, kept the Senate in session through Wednesday night and into early Thursday afternoon, and has vowed to continue calling round-the-clock confirmation votes through the weekend if Republicans continue to delay the process. – Jeremy Peters

- Hagel: Budget deal makes planning easier for defense -
DEFENSE SECRETARY CHUCK HAGEL AT A BRIEFING WITH SINGAPORE MINISTER OF DEFENSE DR. NG ENG HEN: “This agreement does not solve all of DODs budget problems but it helps address readiness especially in 2014 with putting more money back in training, in particular, and procurement. It also gives us some new certainty, predictability for our planning, for our budgeting over the next two years which is particularly important.”

- Pawlenty: Budget Deal is ‘a positive’ for Ryan’s political career -
FORMER MINNESOTA GOV. TIM PAWLENTY TO THE WALL STREET JOURNAL’S SARA MURRAY: “Being able to show that you can lead and you can govern and not just talk about things. That you can achieve the result is something that is a positive … It is helpful (for Ryan’s political future) It shows leadership. It shows courage … From the party standpoint of course they like people who don’t make these types of deals, who are compromising, but the broader publics likes folks who are willing to reach across the aisle, willing to work together and try to get something done for the good of the country. So from that score I think it’s a positive for Congressman Ryan. He’s going take some hits for it but he’s also going to get some praise for it.

- Rubio: Budget deal hinders American Dream -
SEN. MARCO RUBIO, R-FLORIDA, IN AN OP-ED ON BREITBART: “We should never accept this as the new normal. We can reverse the insecurity, the lack of opportunity and the anxiety about the future. We can restore the American Dream … This budget deal fails to address the biggest obstacles that stand between our people and the American Dream. It keeps us on the same road to ruin that Washington has placed us on.”

The Daily Beast (‏@thedailybeast)
On average, there's been a school shooting every 2 weeks since Newtown http://thebea.st/1d9FDVC

Sen. Henry Dodge, D-Wisconsin, and his son Sen. Augustus C. Dodge, D-Iowa, both served as senators during the 30th to 34th Congresses. They were the only father and son to serve simultaneously in the Senate.