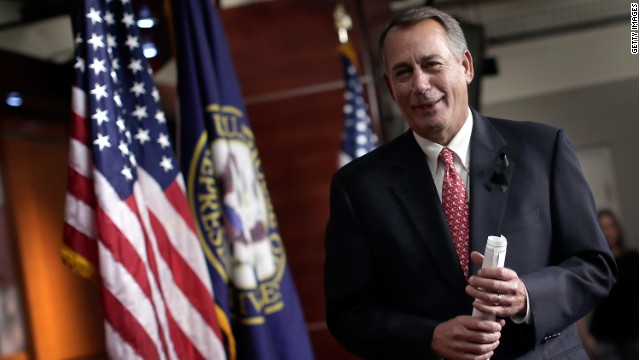 He told reporters the groups had lost credibility by slamming the deal even before it was announced on Tuesday night.

"Listen, I take my fair share of criticism from the right and from the left.  You know, I came here to fight for a smaller, less costly, more accountable federal government and this budget agreement takes giant steps in the right direction. It is not everything I wanted. But when groups come out and criticize an agreement they have never seen you begin to wonder just how credible those actions are," Boehner said in responding to a question from CNN Chief Congressional Correspondent Dana Bash.

"There should be room within the Republican party for honest disagreements on policy, without it devolving into name calling and accusations about people's motives," Heritage Action for America CEO Michael Needham told Bash, in response to the Speaker's comments.

While they are far from household names for most Americans, these groups are very influential among many Republican primary voters, and among GOP lawmakers in Congress.

"They have an amazing access to GOP primary voters across the country who are paying attention to what's going on. Most Republican members are very concerned about the opinions of these groups, because they highlight how those lawmakers vote on key issues, and let the voters back home know how their members of Congress are voting," added Bonjean.

The groups, which have been effectively arguing against compromise in the budget battles on Capitol Hill the past three years, were also strong advocates in September of the hardline stance over defunding the national health care law that resulted in the first partial federal government shutdown in nearly two decades.

Besides taking stances on key congressional legislation, two of the groups - Club for Growth, and Americans for Prosperity - also endorse and support fiscal conservative candidates in Republican primaries and general elections. And with many House Republicans more fearful of a primary challenge from the right than a Democratic opponent in the general election, these groups wield even more influence.

"The primary election to many of them is the general election," Bonjean said.

So who are these groups.

Club for Growth was formed in 1999. The non-profit fiscally conservative group focuses on cutting taxes and spurring economic growth. The group has two political arms, a traditional political action committee and Club for Growth Action, a super PAC.

Americans for Prosperity is a conservative advocacy group formed in 2004. It's a major player and spends big bucks in backing conservative candidates and causes. The group was founded and is supported by Charles and David Koch, the billionaire industrialists.

Heritage Action for America is the new player on the block. The political advocacy group was formed in 2010 and is a sister organization of the Heritage Foundation, one of the oldest and most important conservative think tanks. While Heritage Action takes sides on legislative issues, it does not back candidates. The group has become more active in the year since former Sen. Jim DeMint of South Carolina took over as head of Heritage.